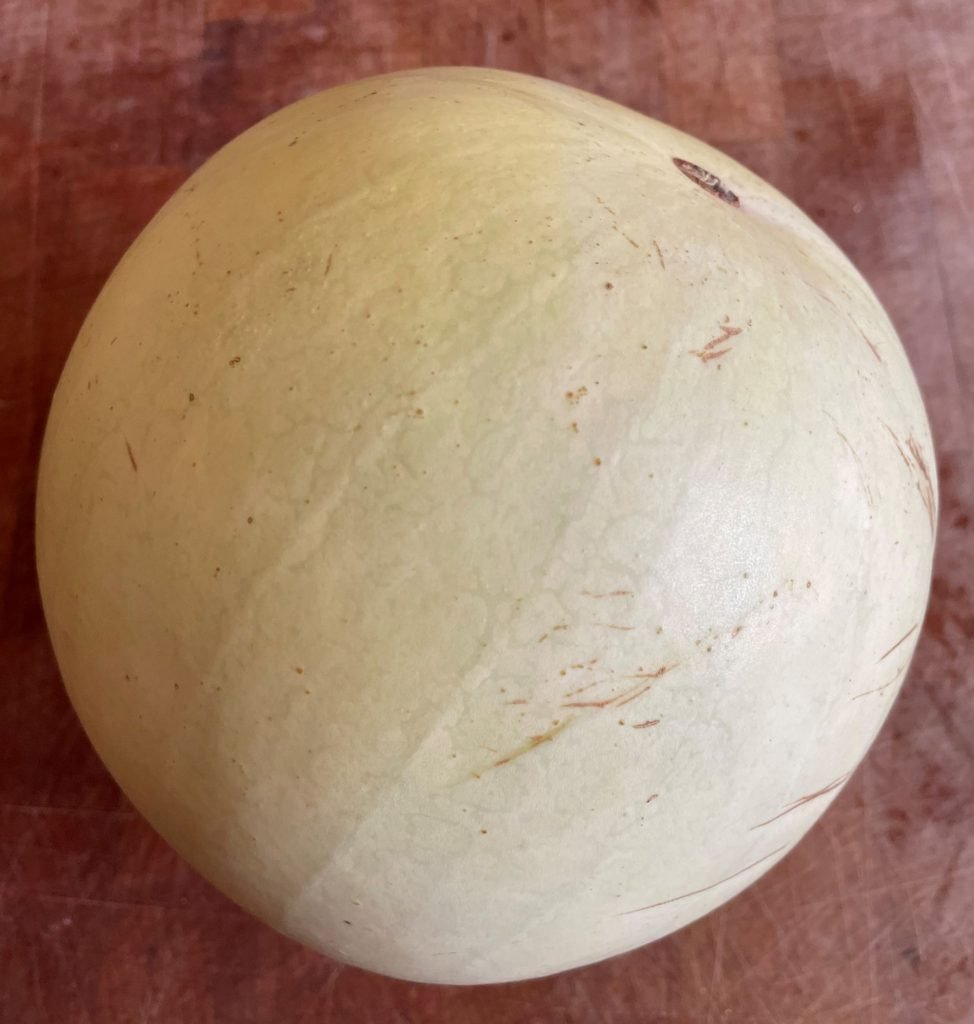 Remember the long piece I wrote last year on the ‘Winter King and Queen’ watermelon? The winter-watermelon fun continues.

Last spring I gave my friend Betty several starts of ‘Winter King and Queen,’ and she grew out all of them. In early September, I brought home from Betty’s farm about eight round, nearly white melons. The two or three that Robert and I ate fresh over the next few weeks were sweet, crisp, aromatic, and delicious. They tasted even better than the single ‘Winter King and Queen’ we ate last year, since this year we found no coarse, pale flesh surrounding the seeds.

After about a month I set three of the melons to brining in a food-grade trash can in the basement (I’m sorry to call the container a trash can, but there seems to exist no other term for it except garbage can, which somehow strikes me as worse). I kept two remaining melons on a shelf in the basement, which, for a basement, is rather warm, because it houses a furnace and a water heater. In mid-December, one of the melons began to liquify, and I put it in the compost pile. The other melon, though, stayed solid until December 27. On that day, although I was dressed in three layers of wool and snow covered the garden, I decided it was time for a taste. 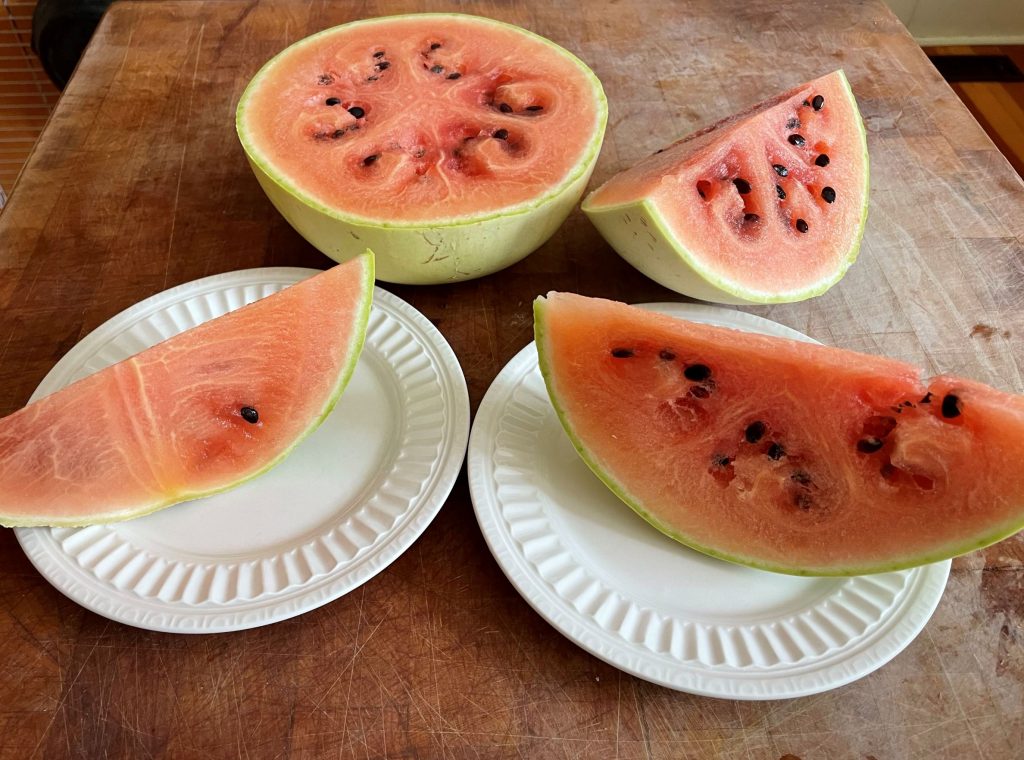 I shivered at the prospect. Watermelon is cooling even when it hasn’t just come out of the fridge. After eating one slice, however, I immediately cut myself another. This ‘Winter King and Queen,’ like the ones we’d eaten in September, was sweet, crisp, and aromatic. The flesh had softened around the seeds in some parts—you can see the darker areas in the picture–but I just scraped out these bits and kept eating.

So, it’s true—the ‘Winter King and Queen’ watermelon really can keep well until Christmas. I might have avoided the softening in one melon and the rotting of the other if I had kept them in a cooler place. (We have another garbage can—truly a garbage can, the old galvanized metal kind—sunk in the ground outside the back door. Maybe I have finally found a use for it.) For all the people who can bring themselves to eat watermelon in December, wouldn’t it be nice to revive the concept of the winter watermelon? Wouldn’t it be nice if farmers sold some of these melons as well as the bland, seedless types that soften so unappetizingly within a week?

Many Germans from Russia consider the ‘Winter King and Queen’ doubly virtuous: They say it is exceptionally good for brining as well as long-keeping. I will see if I agree in a few more weeks, when I lift the first fermented melon out of its brine in the plastic trash can in the basement.

In my blog post about Moldova I shared my daughter’s photo of watermelons that had been brined intact, and I promised to write about how to pickle watermelons in this way. Before watermelon season passes again, I want to share my own photos and a recipe.

I first tasted brined watermelon some fifteen years ago, when I bought a few slices from Guss’ Pickles, whose retail shop was a sidewalk stand on the Lower East Side of Manhattan. If you liked your pickles crisp, fuggetaboudit! The brined watermelon was soft and slimy. It seemed more tomato than melon. But its sweet and sour brininess grew on me.

Much later, I sought advice about pickling watermelons from Gwen Schock Cowherd, a descendant of Germans from Russia—that is, Germans who went to live in Russia after Catherine the Great, in 1763, invited foreigners to immigrate without having to give up their language or religious traditions, pay taxes, or serve in the military. The first of these German immigrants settled along the Volga River, where watermelons were a major crop (later, other Germans settled on the north shore of the Black Sea). A century after their migration began, Germans in Russia lost their special privileges, and whole villages picked themselves up and moved to the Americas—Brazil, Argentina, Canada, and the United States. Today the grandchildren and great-grandchildren of those immigrants still celebrate their Russian-flavored German heritage.

I wanted to know how Germans from Russia pickled whole watermelons. Were the melons fermented or pickled in vinegar? Was sugar added, and were spices included? Were holes poked in the melons to let the brine penetrate?

The melons were of small, firm varieties, Gwen told me, and they ranged from green to ripe. They were always fermented intact. “Do not poke holes in the melons, or the juice will run out,” she warned. With no poking, “the salt water will penetrate the rind and thus preserve the melon. The sweet comes from the melons themselves.” As Gwen remembered, less ripe melons turned out more salty and sour than sweet. Each melon tasted different, because “with the rind intact you didn’t know what you were brining.”

Gwen sent me Mrs. Henry Lindemann’s recipe for “sour watermelons,” from the German Russian Pioneer Cookbook, published in Eureka, South Dakota, in 1975 (Germans from Russia and their American descendants have published hundreds of community cookbooks). Mrs. Lindeman would line the bottom of a 30-gallon barrel with dill, fill the barrel with melons, top them with more dill, and add 1½ cups sugar, 1 cup vinegar, 6 pounds salt, “lots of red peppers,” and garlic. Then she would fill the barrel with water and weight the melons with a board and a rock.

In Sei Unser Gast (“Be Our Guest”), a cookbook published by the North Star Chapter of the American Historical Society of Germans from Russia in Minneapolis in 1996, a writer left the sugar, vinegar, peppers, and garlic out of her watermelon pickle but added grape leaves. According to Küchen Kochen, published by the Lincoln, Nebraska, branch of the same organization in 1973, some cooks scattered cherry rather than grape leaves throughout the barrel, along with hunks of ripe melon flesh.Gwen’s own grandma left out all of those extras but added pickling spices. “I guess you can spice them anyway you want,” Gwen said. As with cucumber pickles, there is no single right way to season a watermelon pickle.

In the fall of 2010, I decided to try pickling Golden Midget, a 3-pound watermelon variety that had been developed at the University of New Hampshire in the mid-twentieth century. Borne on yellow-leaved vines, the little fruits tell you when they’re ripe by turning from light green to lemon-yellow. I figured their size would make them perfect for pickling. I used two of them to make my own version of—

Put the melons into a large crock or food-grade plastic pail with the dill, garlic, and peppers. Stir the salt into the water until it dissolves, and pour the brine over the melons. Weight them with a clean rock or a plate or board topped with a water-filled jar. Be sure the watermelons remain well immersed in the brine. Cover the crock with a cloth, and let the crock stand at room temperature.

Check the crock daily, and skim off any yeast or mold. Wait at least four weeks before cutting open a watermelon. At this point you might move the crock to a cellar, where the remaining melons should keep all winter.

On New Year’s Eve of the same year, I cut open one of the melons. The flesh was glistening, tender, and red throughout. The melon smelled and tasted like a strong fermented cucumber pickle, with extra sweetness and the slimy texture I remembered from the pickled watermelon I’d tasted in New York. I took the melon to a New Year’s Eve party, and people tasted it with interest. For some a little taste was enough, but others ate big slices with gusto.

The next time I pickle watermelon, I’ll do a few things differently. Because I had to skim mold off the brine for an extended period, I’ll use a crock with a water lock. I might add a little vinegar to curb mold growth or some cucumber pickle brine to speed the fermentation. And I’ll add a little sugar, just to see what difference it makes.

My single complaint about Golden Midget is that its thin rind caved in a bit with brining, so that the pickled melons looked like partially deflated playground balls. But an icebox melon with a thicker rind might collapse this way, too, according to my Moldovan friend Cristina. Still, next year I may try a variety that Germans from Russia might have chosen generations ago, such as Astrakhanski, Melitopolski, or the white-fleshed Cream of Saskatchewan.