I’ve had to wait through several weeks of computer woes to post his piece. I send it with wishes for a happy new year! 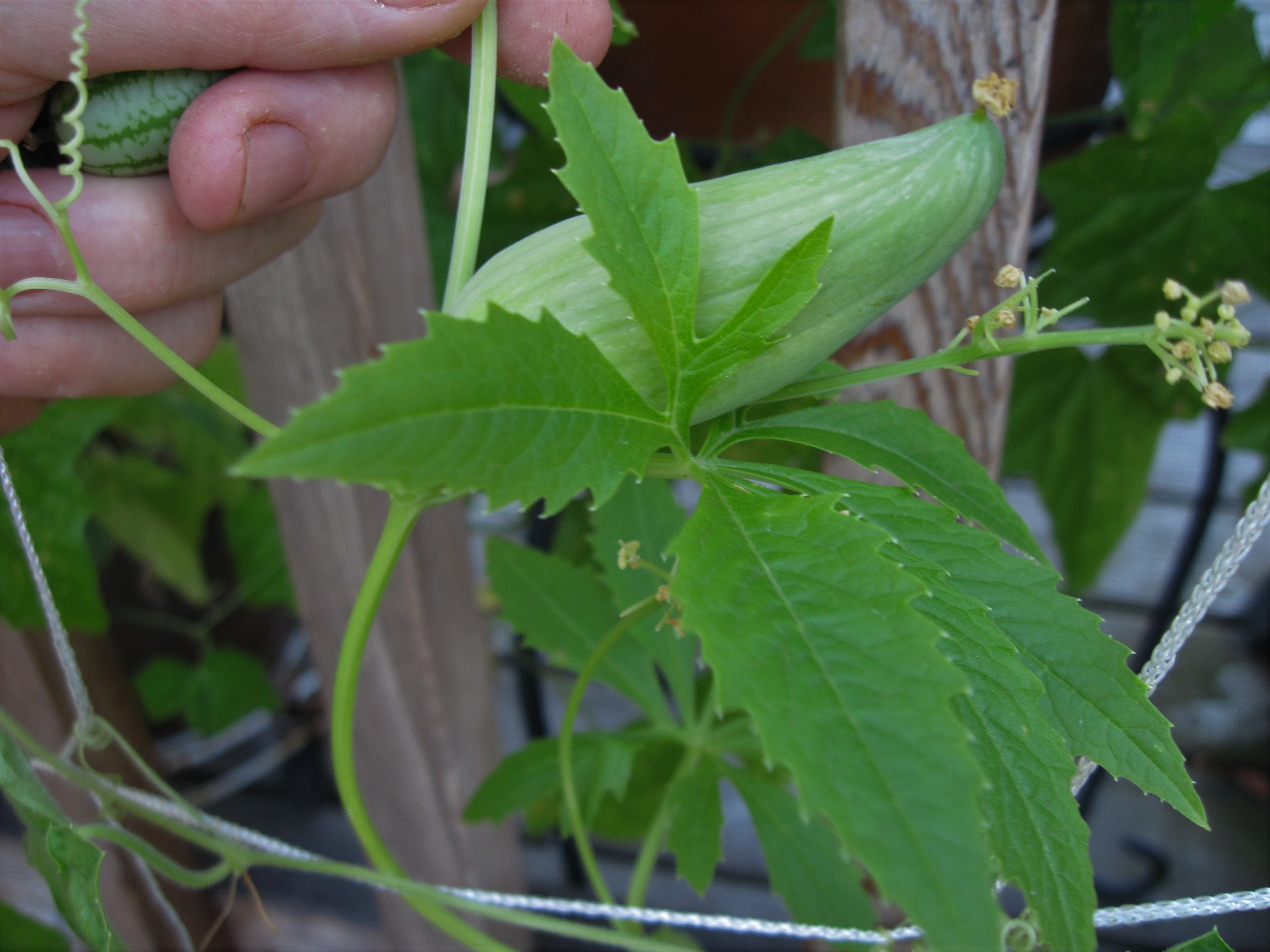 Achocha foliage with a fruit behind it. In my hand is a sandita.

In mid-December, freezing rain adorned the bare branches in my garden with icicles, which hung in place through a day of snow and several nearly sunless days that followed. But autumn’s first freeze had come only about a week before the freezing rain, nearly two months late. Suddenly, the nasturtiums, tomatillos, and oca and sandita tops had turned to mush. But no matter: The tomatillos and sanditas had long stopped fruiting, the nasturtiums hadn’t borne blossoms for weeks, and the oca had set its little pink tubers, which were now ready for harvest.

Only one vegetable plant seemed caught off-guard by the freezing weather: the achocha, Cyclanthera pedata. Just the day before it had seemed still in its prime, filling out its trellis and climbing onto the deck to smother the potted plants there.

This South American native, so long domesticated that it can’t be found in the wild, goes by many names, among them caigua, lady’s slipper, and Bolivian cucumber. Although achocha indeed belongs to the cucumber family, to me it resembles a cucumber only in that both are vines, and even in their vining the two differ radically. The achocha, unlike the cucumber, attaches itself to trellises and anything else in its path by grape-like tendrils. The smooth, bright green leaves are un-cucumber-like as well; in fact, they look like cannabis leaves.* Achocha fruits are plump but two-sided, gently curved like mangoes, and smooth, firm, and semi-hollow like peppers.

Through the summer, my single achocha plant suffered in the warm, light soil on the sunny south side of the deck. The vine grew slowly and seemed set on hiding under the deck instead of climbing the trellis of nylon netting. Soaking the roots with water didn’t seem to help, though perhaps I didn’t soak them often enough.

Then the rains came, and cooler weather, and the vine flourished. At the end of August it had produced only three fruits; before the freeze it bore seven more, each two to three inches long.

I’m not sure why my yield was so poor. Achocha is said to like plenty of sun and well-drained soil, but it also likes moisture and humidity, and Willamette Valley summers are dry. Perhaps my achocha would have thrived if I’d managed to keep its roots cool and moist with a well-placed rock or a sheltering neighboring plant. Maybe the east side of the deck would have been a better place to plant the achocha.

But since the vine managed to produce lots of tiny flowers through the summer and fall, I suspect my main problem was not the planting site but poor pollination. Achocha flowers are pollinated by hoverflies, or syrphid flies, which come in many species but generally look like wasps or bees with just one pair of wings—distinctly long wings—instead of two pairs. I saw no hoverflies around my achocha.

Or maybe I didn’t look hard enough; maybe I simply didn’t notice the hoverflies. Although achocha is supposed to be self-fertile, perhaps pollination is improved with two or more plants.

Other problems I had with this plant were (1) finding the fruit, and (2) knowing when to pick it. The fruit starts out as green as a jalapeno pepper, the same color as the foliage, and maintains this color for weeks, it seems, before lightening a bit. When I managed, with difficulty, to find some fruits among the foliage, I couldn’t tell how ripe they were. Achocha fruits are edible at all stages, but the older ones are more hollow inside, with big, black, roughly square and wrinkled seeds. From less developed fruits, I scraped out the tender, pale seeds and the spongy white pulp around them with a grapefruit spoon.

The seeded fruits are bland-tasting but pleasantly crisp. South American writers say that younger achocha fruits can be eaten raw, whereas the older ones are usually cooked. Achochas are often stuffed—so often, in fact, that in some places they are called pepinos de rellenar. And I’ve read that baby achochas, as small as olives, are sometimes pickled.

Finding myself alone one evening with five achocha fruits, I decided to use them in a stir-fry for one, along with the last of the eggplants :

Pour into a hot wok 1 teaspoon of the peanut oil. Add the onion, and stir-fry the pieces until they are barely tender. Add the garlic and ginger, and stir-fry about 10 seconds more. Remove the onion mixture to a serving bowl.

Return the wok to the heat. Add the remaining peanut oil, and then the achochas and eggplants. Stir-fry the vegetables briefly, until the achochas turn a brighter green. Reduce the heat, and add about 2 tablespoons sake. Dribble about 2 teaspoons soy sauce down the inside of the wok. Add the honey. Cover the wok, and simmer the vegetables until they are just tender.

Return the onion mixture to the wok, and stir. Sprinkle over about ½ teaspoon sesame oil. Cover the wok, and turn off the heat. Wait 1 minute.

Transfer the stir-fried vegetables into a serving bowl, and sprinkle the sesame seeds over. Serve the vegetables with steamed greens and steamed rice.

It was a fine solo meal, texturally rich with the crisp achocha, soft eggplant, firm onion, and chewy sesame. I hope you’ll keep stir-frying in mind among ways to prepare achochas. And definitely try partnering achochas with eggplants.

Achochas probably haven’t yet shown up in your local farmers’ market, but you can buy seeds from Siskiyou Seeds.

*Achocha is so little known in the United States that writers disagree on its botanical name. Those marijuana-like leaves are a clue: They are palmate, or like a bird’s foot, which is what the species name pedata means. C. brachystachya, a relative with which C. pedata has been confused, has very different leaves as well as much smaller, oblong, spiny fruits. A common name for C. brachystachya is cuchinito, “little piggy.” The piggies are said to make good, gherkin-like pickles.