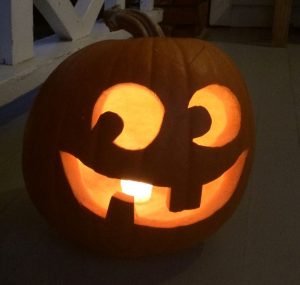 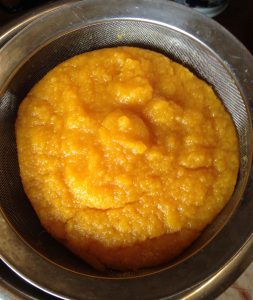 I first made parsnip soup many years ago, after listening with my then-small eldest child to Peggy Seeger sing, “What Did You Have for Your Supper?” on the record American Folk Songs for Children.* I didn’t read the song’s title in the record notes, though, and I heard the words as “What’ll you have for your supper?”

With each sweet Peggy’s voice soared to the top of the octave; Jimmy was pleading for sweet white comfort food that Mother and no other could provide. Or so I thought.

Little did I know that I was hearing a surviving fragment of “Lord Randall,” an Anglo-Scottish ballad about a man who may actually have lived, in the thirteenth century or thereabouts, until he was poisoned—by his sweetheart at dinner, according to most versions of the song. Typical versions say that she also poisons Randall’s dogs, who “swell up.” Feeling poorly after the meal, Randall goes home to his mother. The story is told through conversation between mother and son as poor Randall heads for his deathbed. Fuller versions don’t mention milk or parsnips; usually he has eaten eels or other fish. And Mother is always less curious about the tainted food than she is about the distribution of Randall’s worldly goods.

The parsnip has been popular since Roman times, though it was probably thin and woody and suitable only for flavoring until about the time Lord Randall was getting sick on eels. Then gardeners developed it into a fleshy, aromatic root that at its best cooks up quite tender. The parsnip is still a trial for the gardener; with seeds slower to sprout even than those of most other umbellales, the plant take months to grow to size while the gardener repeatedly weeds around the root. Then it must stay in the ground even longer, well mulched, until it is sweetened by frost. Finally it can be stored in a cellar or left in the ground, depending on your climate, until some cold night in winter or early spring when you’re craving something sweet, starchy, and soothing.

The modern English name parsnip may have been influenced by parsley, for a white-rooted cousin, and turnip, for an unrelated and fleshier root vegetable. The parsnip is even more like the carrot than like either of these, but sweeter and starchier, with no bitterness. People who describe the parsnip’s flavor as “nutty” are probably thinking of chestnuts.

Parsnips are good roasted, fried, pureed with apples or carrots or potatoes, diced in chicken pot pie, and flavored with curry powder or ginger. But when I heard Peggy’s song I knew just what I wanted to make with parsnips, and it’s what I most like to make with them today:

Saute some diced onion in butter. Add diced parsnips (don’t bother to peel them first). Add chicken stock, and cook the parsnips in the stock until they are tender. Add milk, cream, or half-and-half. Season with salt, white pepper, and grated nutmeg. Puree the soup in a blender, and reheat it if needed.

I don’t believe Jimmy Randall ever got sick on sweet milk and parsnips. It was his mother who fed him the soup, I’m sure, and he woke up the next morning feeling fit and lively. Even his dogs survived. At least that’s how I like to sing the song.

*Rounder Records 8001/8002/8003. Sung and played by Peggy and her brother, Mike Seeger, the 94 songs on this album are from the book American Folk Songs for Children, by their mother, Ruth Crawford Seeger. The book is still in print, and the album is now available on CD. 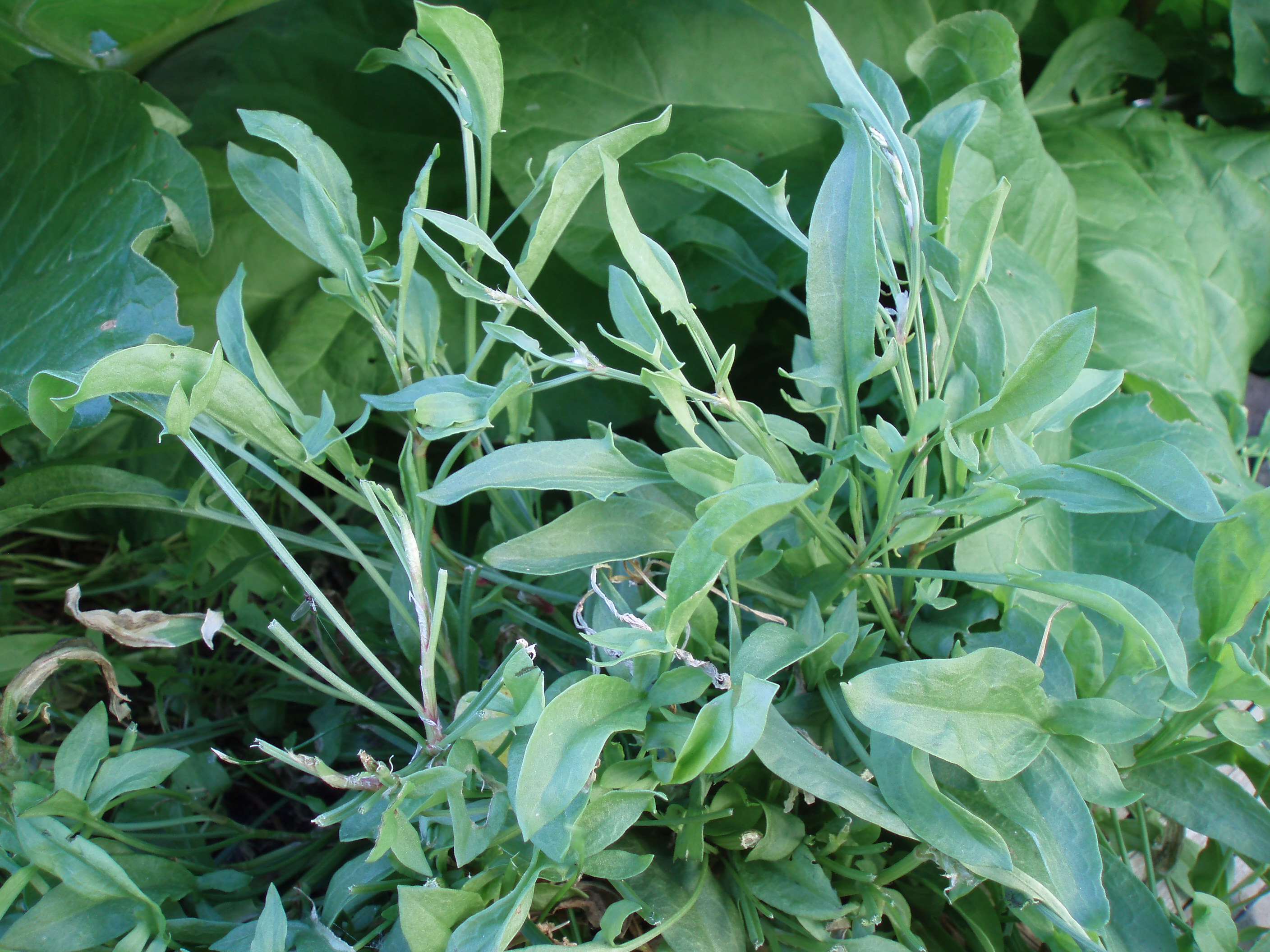 A few days ago, while tearing up the sorrel that had invaded my rhubarb bed, I took care to separate the leaves from the creeping roots. The roots I left on the ground to rot; the leaves I took into the house for soup.

In past years I have grown French sorrel (Rumex scutatus), which has relatively large, shield-shaped leaves, but this Eurasian perennial has never survived our wet winters. I might one day try garden sorrel (R. acetosa), which has big leaves shaped like arrowheads and grows well in England. But for now I may as well enjoy my field sorrel, or sheep sorrel (R. acetosella), with its small, arrowhead-shaped leaves. Like rhubarb, its cousin, this spreading weed loves the bed I made by stacking newspapers and heaping mint pummy atop the native soil. If I let it, field sorrel will take over other half-shaded areas of the garden with rich, acidic soil.

Like rhubarb, all species of Rumex are rich in oxalic acid, which gives the leaves their sour, lemon-like flavor. These species are not to be confused, though, with Oxalis, trefoil wood sorrels, although Oxalis species, too, are edible. California children love to chew the stems of a yellow-flowered wood sorrel, which they call sour grass. According to Patience Gray (Honey from a Weed), the French once considered Oxalis the best sorrel for sorrel soup, or potage Germiny, which even today bears slivers of French sorrel in imitation of tiny wood sorrel stems, for the stems didn’t break down with pounding as the leaves did.

With a name that comes from the same root as sour, sorrel has a long history as both a medicinal and a culinary herb. It has been considered cooling and cleansing, a remedy for fever and for bladder, liver, kidney, and skin problems. The English have traditionally used garden sorrel in a sauce, called green sauce, to accompany meat. Other Europeans use sorrel as a stuffing for fish, as an addition to spinach soup, and, sauteed in butter, as a drssing for steamed potatoes. Sadly, in the United States sorrel hasn’t really caught on.

The cook preparing sorrel for the first time should remember three things: (1) You must use nonreactive cookware with this acidic vegetable. (2) Sorrel needs only very brief cooking. (3) Sorrel won’t keep its bright color. When cooked, the leaves turn gray-green.

I had picked sorrel leaves from the rhubarb bed once this past summer to make potage Germiny, a soup that’s truly cooling when it’s served chilled, as it typically is. In early November, the sorrel leaves were so tender and succulent that looking at them made my mouth water, but I wanted a warming soup for dinner. And I didn’t want a gray puree.

So I decided to combine the sorrel with potato and, instead of white or yellow globe onions, the giant scallions so abundant in my fall garden (leeks would have worked as well). The soup turned out green–well, moss green, but at least you couldn’t call it gray. With nothing to accompany it but homemade bread, it made a warming, satisfying, and delicious autumn meal.

Melt the butter in a nonreactive pot, and gently cook the scallions or leeks in the butter until they are tender.

Add the stock. When it has nearly begun to boil, add the potato. Cover the pot, and cook the mixture until the potato pieces are tender.

Stir in the sorrel leaves. As soon as they are wilted, whirl the mixture until smooth in a blender. Check for any strings (from the sorrel stems); if you find them, you should strain the soup.

Stir in the cream and some salt. If needed, reheat the soup before serving.