“That weed we had last night gave me whacky dreams,” complained Robert. His dreams may have been whacky, but he was wrong to blame the weed: Pokeweed has no reputation for causing wild or vivid dreams. Poke just makes you throw up or get the runs. Or it kills you. And these things happen only if the cook is careless, which I’m not.

Pokeweed is new to our table, though it grows untended in our garden. I used to think poke grew only in the Deep South, in the kind of place where the movie Deliverance took place. Or in Louisiana, where the gators are so mean that they eat grannies, says Tony Joe White’s song “Polk Sallet Annie.” Actually, according to the USDA, Phytolacca americana is native to all but ten states and to eastern Canada besides. I think it must be new in my town, because most people here don’t recognize it. But today it’s growing rampant in our parks and gardens. 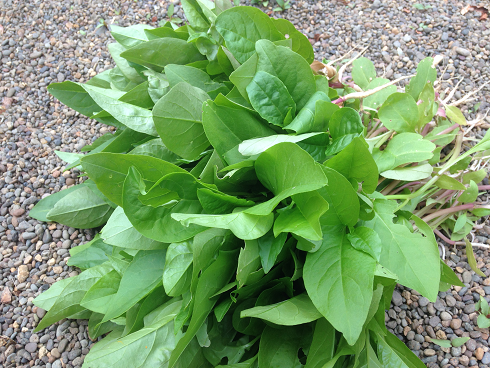 I don’t call it by its Southern name, poke sallet, because poke is a potherb, not a salad herb. That is, you must boil the stuff before eating it. As an early-summer seedling, unfortunately, poke looks like a salad herb, with tender, deep-green leaves that remind me of flat-leafed spinach. Like spinach, poke leaves are rich in vitamins A and C. As I gather the leaves, I have to restrain myself from biting into one.

Unlike spinach, poke is an herbaceous perennial. Mature plants look like medium-large shrubs, with thick, 8- to 10-foot stems that turn from light green to crimson over the summer. Bunches of berries hang from the branches, gradually turning from green to shiny black. For a while the plant is gorgeous, and then comes the pleasure of watching birds gorge themselves on the fruit. Afterward you either cut the plant down or let freezing weather do it in.

The poison in poke, people say, is in the red parts. For this reason you’re not supposed to eat poke shoots that are more than 6 to 8 inches high. But shoots that grow in the shade grow taller before they redden. I’ve harvested foot-tall, all-green seedlings from a shady area while rejecting pink-tinged 2-inch seedlings growing in gravel in full sun.

The most poisonous part of the plant, people say, is the root. The last time I harvested pokeweed I pulled the seedlings from the ground, but next time I’ll remember to clip them at the soil line instead.

To remove any trace of poison, poke leaves should be boiled in two or three changes of water. Southerners typically recommend long boiling—20 or 30 minutes or more. I suspect this is because they gather leaves from older plants. The master forager Green Deane advises harvesting shoots no taller than 6 inches and boiling them once for a minute and again, in fresh water, for 15 minutes. In 15 minutes, however, young leaves turn into something resembling pond scum. Is this what Southerners mean by “a mess of greens”? In any case, the next time I gather poke I’ll consider the advice of North Carolina State Extension: “Peel and parboil tender young shoots (less than eight inches) in two changes of water several minutes each.” That’s pretty vague, but if I aim for two 5-minute boilings I’ll take 6 minutes off Green Deane’s total cooking time, and perhaps my poke leaves will retain some integrity.

Besides the leaves, other parts of the poke plant are useful. Although I’ve thrown out even the tiny stems of my poke seedlings, some people cook and eat both young and old stems, although they carefully peel away the red skins first. Some fanciers compare poke stems to asparagus.

Poke berries not only make a fine ink, but they are sometimes taken a few at a time as a remedy for arthritis or gout, and when they are crushed and strained of their seeds they are said to make a delicious and nutritious juice. Although many people warn against eating poke seeds, North Carolina State Extension says that “cooked berries are safe for making pies.”

I must admit that I find pokeweed bland. It has none of the strong and interesting taste of spinach, chard, cabbage, mustard, or even lettuce. For children, this is probably a virtue. And perhaps if I cook my poke for a shorter period next time I’ll be able to appreciate its subtle flavor.

I do like poke in the traditional recipe below. Here bacon fat and eggs lend plenty of flavor, while pokeweed provides a beautiful contrasting color along with a texture like well-cooked spinach.

In a skillet, melt the bacon fat over medium heat. Add the greens, spread them in the pan, and heat them through. Add the eggs and the salt and pepper. Turn the eggs and greens together, gently, until the eggs are just set. Serve immediately.