The best apple chutney I ever ate was made as I watched by a sorority cook who said she never used a recipe. She would make chutney quickly and instinctively for the young women in her care the same day that they would eat it, and they would eat it all. The apple slices in Trish’s chutney were tender but whole. Her chutney tasted as much of apples as of vinegar or spices.

English-style chutneys, to my mind, are too often too sour, too sweet, too dark, too pasty. Sometimes I can’t identify the main ingredient without looking at the label—even if I’ve made the chutney myself. A good rhubarb chutney is particularly difficult to produce, since rhubarb so quickly turns to mush as it cooks and since it’s quite sour even before you add vinegar.

As I pulled my first rhubarb stalks of the season last week, I vowed to make a rhubarb chutney inspired by Trish’s apple chutney. I wouldn’t can my chutney, since I’d make only a small quantity and since I wouldn’t use enough sugar and vinegar to guarantee safety without laboratory testing. The lesser quantities of sugar and vinegar would produce a thick chutney with only brief cooking, and I needed to keep the cooking brief so the rhubarb wouldn’t turn to mush.

But what to do about color? Most rhubarb stalks are more green than red, and when you combine them with spices you get brown. My rhubarb stalks were almost entirely green, but I wanted my chutney to be as red as cooks imagine rhubarb to be. So I decided to add hibiscus flowers, jamaica. They would contribute their own tartness to the mix, but just a little hibiscus would produce a lot of color.

Here’s the recipe I created that day. The chutney is a wonderful accompaniment to grilled chicken.

You can buy dried hibiscus flowers in Mexican and Middle Eastern markets. Grind them in an electric coffee grinder.

Combine all the ingredients in a large, heavy-bottomed pot. Simmer them about 15 minutes, stirring occasionally and gently. When the liquid is nearly all absorbed, remove the pot from the heat.

Store the cooled chutney in the refrigerator. Before serving, remove the cinnamon stick. You might also warm the chutney briefly, on the stove or in a microwave oven.

Finally I am running out of quinces. I have two trees, of the variety ‘Pineapple’, and they produce more reliably than any of the apple, pear, plum, and cherry trees in my lowland orchard. So I always give away quinces, and this year I even sold some. Yet it’s January 20, and still I have a box of the fruit left in the unheated guest bedroom.

I’m not complaining. Quinces are good for a lot of things. From the nineteenth century until after World War II, quinces were valued especially for their pectin. People would cook the sliced fruit in water, and then either make the liquid into jelly or boil it down until it was sour and viscous before combining it with other fruits in jelly or jam. For centuries before that quinces were made into paste, the original marmalade—or, simply, thick, sliceable jam—to be served as finger food. Quince paste has never lost popularity in Spain or parts of Latin America, and it has been coming back into style in the United States, often under the Spanish name, membrillo. Even more appealing than quince paste, to me, are pastes from quinces combined with other fruits, such as berries and plums. Quinces also make delightful, fragrant syrups (I most like a raw syrup of quince and honey), and jams that can turn out red or white, and smooth or rough, depending on your method. Cooked in syrup for nearly two hours, quince cubes or slices become a ruby-red spoon sweet. Steeped in vodka with sugar, quinces become an aromatic liqueur. Poached in white wine with honey, they become a tart relish for roasts or even a dessert. Quinces combine well with apples in pie, and some people like them best simply hollowed out (with a coring tool that looks like a small, heavy spoon with a pointed tip) and baked whole like an apple.

Having made all those things this year, I wanted to try something different. I gazed at the quinces, sitting in the guest bedroom beside the last of the peppers (peppers keep much longer in a cool room, by the way, than they do in a refrigerator), and I wanted to combine the two. I’d already made some wonderful quince–red pepper jelly. What else could I try? I decided on— 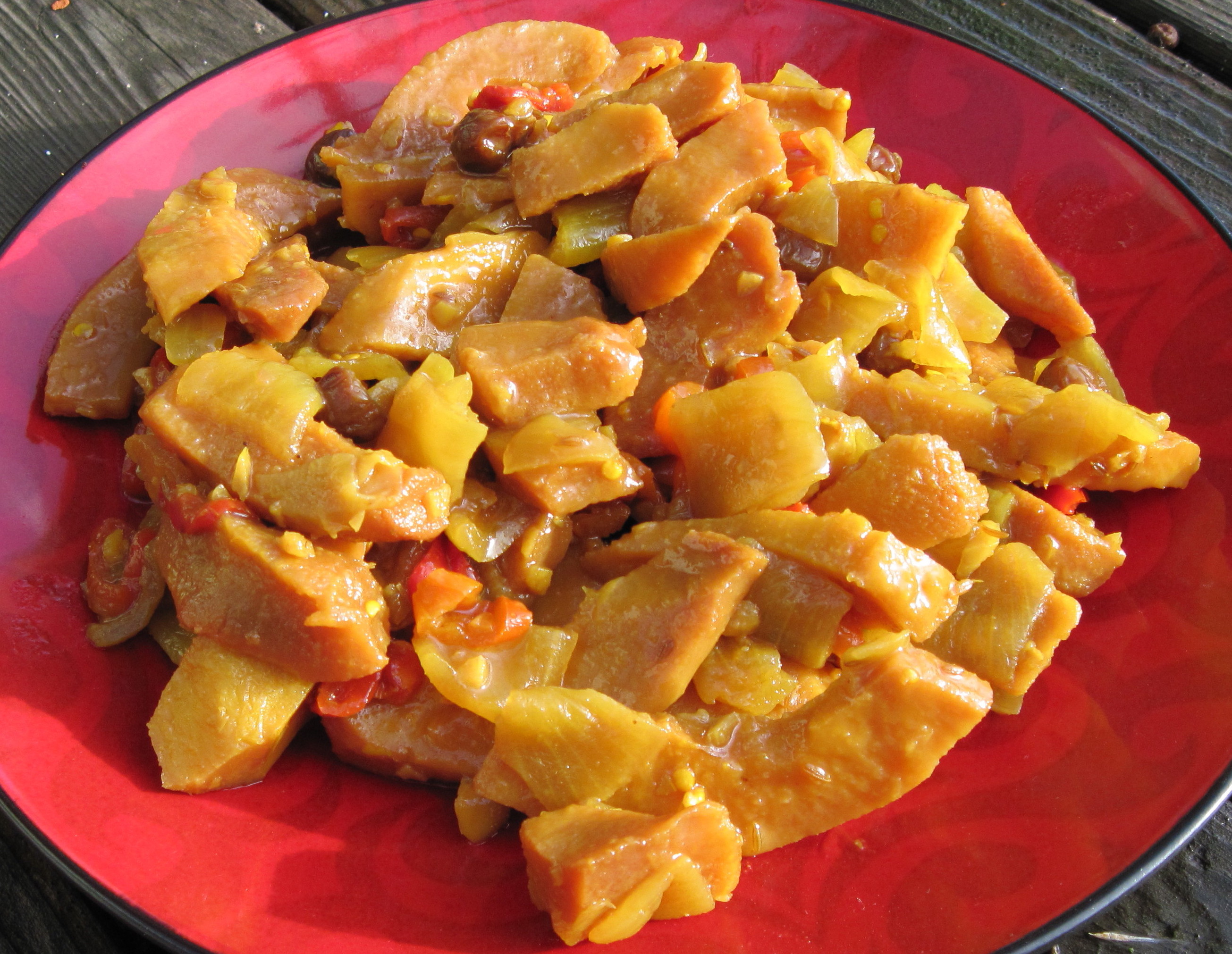 Heat the oil in a preserving pan. Add the garlic and cumin seeds, and stir them over medium heat until they release their aroma. Immediately add the remaining ingredients. Boil the mixture gently, uncovered, over low heat, stirring occasionally, until the liquid is absorbed and the quince pieces are tender, 1 1/4 to 1 1/2 hours.

When the chutney has cooled, store it in a covered container in the refrigerator. It’s even better after a week or two.

*Available in Indian markets, mustard oil is always labeled in the United States as “for external use only.” The USDA requires this labeling because the oil contains erucic acid, which is said to cause “nutritional deficiencies as well as cardiac lesions” in lab rats (mustard seeds and prepared mustard also contain this natural chemical, of course). Mustard oil has a very strong flavor. If you’re not sure you like it, use only 1 tablespoon. If you’re sure you don’t like it, or if none is available, substitute another oil.

This recipe is actually a variant of one I developed for apple chutney, and that chutney turned out equally delicious. So, if your guest bedroom is filled with apples rather than quinces, this is a fine way to use them.