Before the routine use of mason jars or even paraffin in the home kitchen, olive oil was often used, in America as well as Europe, to seal air out of jars of vinegar-pickled vegetables. When you’re canning pickles in the modern way today, oil might seem a superfluous addition—if it didn’t make the vegetables look and taste so good after they’re drawn, unctuously gleaming, from the jar.

Once you’ve pried off the lid and stored the jar in the fridge, though, the oil can partially or totally solidify. That doesn’t make for such a pretty pickle. Here’s how Matt, one reader of The Joy of Pickling, encountered this problem:

I’m a beginner to this experience, and have made a few pickle recipes from your Joy book. I have a question relating to a recipe I did of the olive oil pickles (page 98). I did as instructed, and opened around 4 weeks after pantry storage. They tasted amazing! After about a week in the fridge, however, the opened jar formed small, white beads at the top. They vary in diameter, but all quite smaller than the mustard seeds.

The unopened ones do not exhibit this, and I am concerned that there is something wrong. Perhaps this is some congealing of ingredients, but I wanted to see if you’ve encountered similar results. I haven’t eaten them since they’ve been in the fridge (e.g., formed the beads), so am only hoping that the refrigeration is the factor here, and that they are safe to eat.

And here are two photos that Matt sent me: 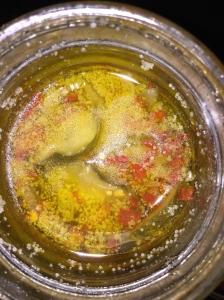 The solution to this problem is simple: Take the jar out of the refrigerator a little before serving time, and let the oil melt in the warmer air outside the fridge. In Matt’s case the oil had only slightly solidified, so the melting probably took only ten minutes or so.

There’s something else to remember about oiled pickles: Oil on the rim of the jar or on the lid’s sealing compound can prevent a good seal. So be sure to leave adequate headspace in the jar, wipe any oil off the rim with a paper towel or clean cloth dampened with vinegar before placing the lid on top, and avoid tipping the jars or boiling the water hard during processing.

If you listened to “America’s Test Kitchen” tonight, you heard Chris Kimball and Bridget Lancaster struggle with a listener’s question about mustard oil: Why is it labeled “for external use only,” and is the stuff safe to cook with? Bridget figured, rightly, that the oil was labeled that way to get around “some government regulation,” and that it was probably safe to use in small amounts. At this point I imagined readers of The Joy of Pickling waving their arms and shouting at their radios in their eagerness to supply a fuller answer.

For those of you who haven’t read The Joy of Pickling—or at least not cover to cover, yet—here’s the lowdown on mustard oil: In 1989 the U.S. Food and Drug Administration banned its sale for culinary use because some laboratory studies performed in the 1950s associated the oil with nutritional deficiencies and cardiac lesions in rats. Subsequent studies have shown that the results for rats don’t apply to people, and that mustard oil in human diets is in fact associated with a lowered risk of heart disease. In addition, a 1999 U.S. Department of Agriculture report says that mustard oil, like horseradish, contains the pungent antimicrobial chemical allyl isothiocyanate, and that for this reason mustard oil and horseradish “pack a punch against Listeria monocytogenes, E. coli, Staphylococcus aureus and other food pathogens you definitely don’t want in your sandwich.”

Throughout much of India, people have for centuries favored mustard oil for frying and for making oil-based pickles. The unrefined oil has a unique, strong flavor. Use something else—such as raw sesame oil—if you don’t like the taste, but don’t avoid mustard oil out of fear that it will hurt you. Remember that the oil is all in mustard seeds and prepared mustard, which you’ve probably been eating all your life.

You can buy mustard oil at any Indian grocery. Today it’s often combined with cheaper refined oil, so look for the pure stuff. If it’s too strong for you, you can cut it with other oil at home.

Because mustard oil is rich in antioxidants, it will keep for months in a tightly closed container at room temperature.