Once again, about a week ago, I dug into the roots of my Jerusalem artichokes, isolated in a corner of the yard where they get no water that doesn’t fall from the sky, and confined by the landscape fabric I spread to keep the Bermuda grass from invading from two neighbors’ yards. 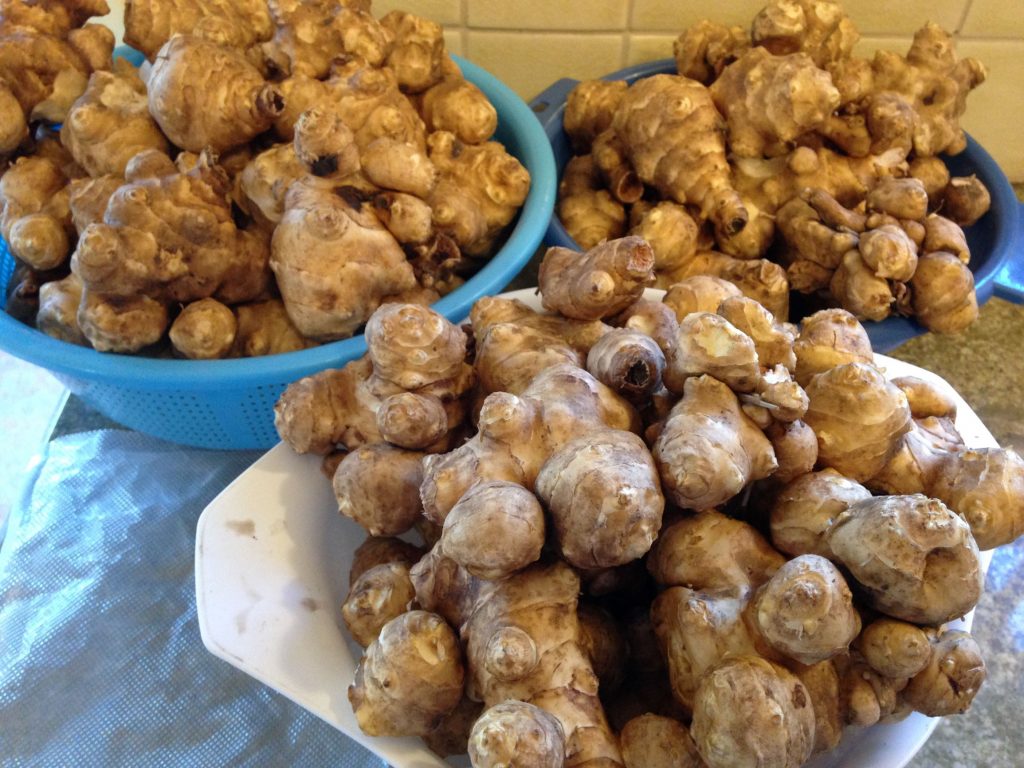 Once again I found a bounty. I loaded the roots into a galvanized washtub and hosed them clean. And then I wondered how Robert and I would eat them all—and how we could do it while avoiding “a filthy loathsome stinking wind,” as John Goodyer described the roots’ aftereffects in 1617.1 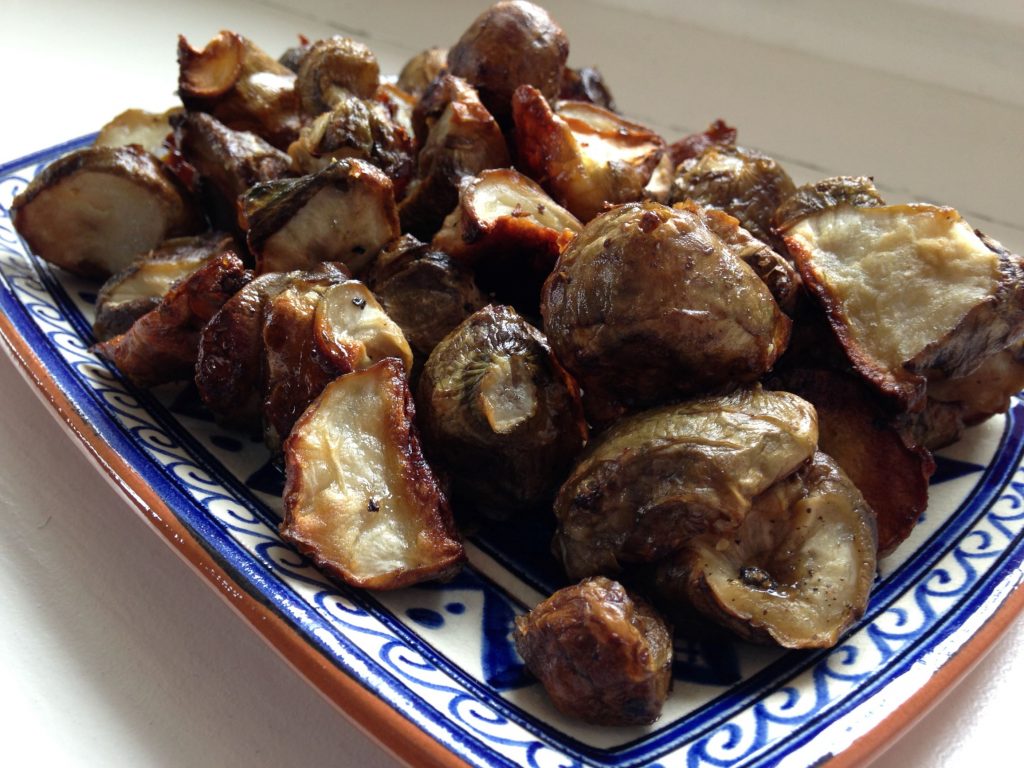 The same day I roasted some of the roots—in the way you would usually roast vegetables, but slower, at 350 degrees F for two hours. The long cooking, I figured, might make the inulin-rich roots more digestible. It did not—but what a delicious dish! The chunks turned out crunchy on the outside and soft and candy-sweet on the inside. Robert thought they would make an excellent side for roast beef.2 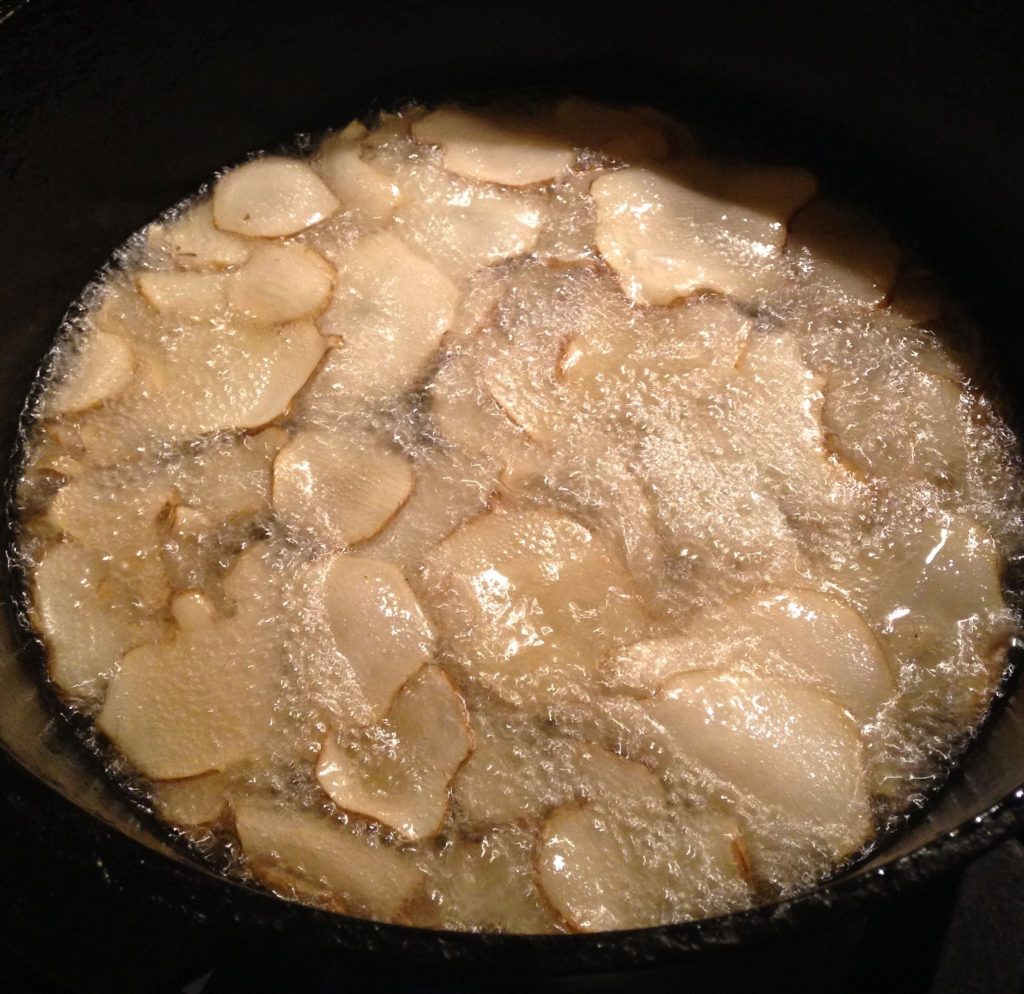 Most of the roots were still sitting in colanders on the kitchen counter when my digestion returned to normal.3 Again they tempted me. I remembered how tasty baked artichoke chips were, the last time I made them. No doubt artichoke chips would be even tastier fried. They would be less trouble to cook that way, and I could quickly use up a large quantity of roots.

In the end I was glad I’d cooked a lot, because the chips shrank substantially; they lost two-thirds of their weight. They turned out curled and brown, a sweet, salty, crisp, greasy delight. They still have gassy powers, but we haven’t suffered much as long as we’ve restricted ourselves to a handful a day. (This takes discipline. The chips are addictive!)

Advocates of vinegar pickling Jerusalem artichokes insist that they won’t cause gas if they’re first boiled and then soaked in vinegar. I suspect the vinegar works simply by slowing consumption. Boiling, however, actually reduces the inulin in the roots; Harold McGee, in The Curious Cook (1990), also advises this method. In fact, inulin is highly soluble in water. It must be the inulin that makes the bubbles appear strangely large when you boil Jerusalem artichokes; the stuff apparently acts as a surfactant. McGee boiled his Jerusalem artichokes for fifteen minutes and figured he had drawn out 40 to 50 percent of the “indigestibles”—the powdery residue left in the pan after he had boiled off the water.

Unfortunately, I don’t like the taste of boiled Jerusalem artichokes. The roots are much tastier raw, roasted, or fried. Judiciously combined with other vegetables, though, Jerusalem artichokes can add appeal. So I boiled some of the roots to mix with mashed potatoes. I routinely boil potatoes as my mother and grandmother did, with only a little water, so the pan ends up dry when the potatoes are ready and no nutrients are lost in the water. To reduce the inulin in the Jerusalem artichokes, though, I gave them a different treatment: I put them into a separate pan, covered them with water, boiled them for about fifteen minutes, and then discarded all the water. The artichokes don’t soften as potatoes do, but if you peel them before or after boiling them (peeling them first is more trouble but may help them shed more inulin) you can force them through a ricer like the one shown here.3   Without drawing too much attention to themselves, the Jerusalem artichokes nicely sweetened the starchy, dry Makah Ozette potatoes. 4  (The Jerusalem artichoke announced its presence more aggressively, but tolerably, some hours later.)

I boiled more Jerusalem artichokes to make a purée to store in the freezer. This time I used a blender, and blended the roots with fresh water instead of the water from the pan. I hope the purée will combine well in a potage with leeks, celery, and other vegetables as well as potatoes.

Here are my recipes for the roasted roots and fried chips. I hope you enjoy them—in moderation, of course!

Put the water into a bowl, and stir in the salt. Slice the Jerusalem artichokes 2 millimeters thick (use a mandoline, if you have one). Drop the slices into the brine as you work. Let the slices soak in the brine for about 4 hours.

Drain the Jerusalem artichoke slices in a colander, and then fry them in batches in oil heated to 350 degrees F. Move them around in the oil every now and then so they cook evenly. When they are shrunken, curled, and lightly browned, they are ready. This should take about 4 minutes. Drain them on paper towels, paper bags, or newspaper.

Heat the oven to 350 degrees F. Put the Jerusalem artichokes into a baking dish with the rosemary, if you’re using it. Pour over the olive oil, and toss. Sprinkle over the salt and pepper. Bake the artichokes for about 2 hours, until they are brown on the outside and tender on the inside.

2. Harold McGee, in The Curious Cook, advises steaming Jerusalem artichokes in an oven at 200 degrees F for 24 hours to break down the inulin into fructose. To me that would seem an extravagant use of fuel, and anyhow his artichokes turned out black.

3. This is not the best way to store Jerusalem artichokes. They should at least be refrigerated; it’s best, in fact, to store them at just above freezing. They also need high humidity during storage. Some people pack them in moist sand or soil in a box or bucket set in a cool place. Alternatively, you can simply leave them in the ground, and dig them out only as you need them, until approximately the end of March.

4. This ricer seems made for Makah Ozette potatoes. Because of their many, deep-set eyes, peeling Ozettes before cooking them wastes too much potato flesh. Peeling them after cooking is too difficult, and burned fingers can ruin your mood. Not peeling the potatoes at all makes for an ugly, uneven mash. But with a ricer you end up with a perfectly smooth mash. The clean skins are left behind, flattened against the screen of the ricer.