While my husband and I were visiting Tours, France, a few weeks ago, the owner of our chambre d’hote (bed-and-breakfast), served us jam that she had made just the day before from rhubarb growing in the long, narrow garden behind her row house. Brigitte’s rhubarb jam was the best I’d ever tasted. And it was green.

Most garden rhubarb has skin that is all or mostly red and flesh that is all or mostly green. Cooks covet varieties that are red through and through, because they make beautiful jams, tarts, and pies. Green-fleshed, red-skinned rhubarb tends to cook up a pinkish brown. For this reason, many cooks combine their rhubarb with strawberries. Some doctor it with red dye.

Brigitte’s rhubarb jam was the color of kiwi flesh. Her plant may have been of a variety called Goliath, which I’ve since found mentioned on a French website and in some British and Australian sources. Or perhaps it was Mammoth Green, which was popular in the United States in the late nineteenth and early twentieth centuries. These old varieties are said to be vigorous and especially tart and flavorful, but they are now rare. Most likely, Brigitte’s rhubarb was Victoria, today’s main commercial variety. Victoria comes in both red and green forms.

Gardeners who buy rhubarb crowns for planting are sometimes surprised to see the stalks come up green. In these cases the crowns were usually sold simply as “rhubarb,” with no mention of color or variety. If your unnamed green rhubarb has pink speckles on the skin near the base of the stalks, and if the plant hurries to send up a seed stalk, it is probably Victoria.

Remembering Brigitte’s beautiful and delicious green rhubarb jam, I wanted to make some like it. But my rhubarb plant—probably red Victoria—has red-skinned stalks with a little red pigment here and there in the flesh. I solved this problem by cutting the stalks approximately in half. The lower halves had pale flesh with occasional pink patches; the upper halves had grass-green flesh with almost no red pigment. I used the lower halves for strawberry-rhubarb preserves. With a paring knife, I skinned the upper halves, and these I turned into green rhubarb jam.

As you can see in the picture, my jam is really a greenish gold; it’s not as green Brigitte’s. But the color is much prettier than pinkish brown, and the flavor is delightful.

Here’s my recipe for green rhubarb jam: Peel the green-fleshed parts of rhubarb stalks, cutting away any pink parts, and cut the stalks crosswise into ½-inch pieces. In a big, wide, nonreactive pot, mix 1 1/2 pounds of these rhubarb pieces with 2 cups sugar. Let the mixture sit overnight; in the morning, the sugar will be nearly completely dissolved. Boil the mixture over medium-high heat until the syrup is almost all absorbed and the texture is jam-like.

In Marina Lewychka’s Short History of Tractors in Ukrainian, an old Ukrainian war refugee, lonely in his English cottage since his wife’s death, refuses to heat his sitting room, because that’s where he stores boxes of apples through the winter. Even after he marries the voluptuous young slattern Valentina, the apples are his dietary staple. He eats them simply sliced and microwaved—Toshiba Apples, his daughter calls them.

Having recently and independently invented Toshiba apples myself, I was embarrassed to read about them. I could have dubbed them Panasonic Apples, after my own trusty nuker, but clearly I was less creative than Lewychka’s character; I hadn’t named the dish at all. Worse, I now realized, I had taken to eating old-people food. Though I still had my teeth, I’d gotten fussy and lazy: I found apple crisp too sweet, apple pie too fatty and troublesome to make, applesauce—well, I loved applesauce, and in fact I had been planning to make some when I discovered Toshiba Apples. I’d sliced and peeled a few apples but then had to go out; there was no time to make a pot of applesauce. So I put the bowl of apple slices in the nuker and ate them hot a few minutes later, with my fingers.

Actually, they were delicious.

It’s a lucky householder who has enough apples to last the winter and a cool room to keep them in (I use an unheated guest bedroom). Good keeping apples, like my Fujis and Braeburns, grow sweeter in storage, and they retain a firm texture instead of growing cottony like a Red Delicious. But by February stored apples may be starting to shrivel; they are no longer attractive as a raw snack or dessert. They are best for cooking, and in winter and early spring you probably prefer a hot snack to a cold one anyway. Microwaving unadorned apple slices is a quick and easy cooking method that preserves the integrity of the slices and their pure apple flavor better than any other.

Here’s how to make Toshiba Apples: Slice and core as many apples as you’d like. I prefer to peel them, but peeling isn’t necessary. Put the slices into a bowl, and nuke them for about ten minutes; the time will vary depending on how much fruit you’re using. You might toss the slices once so they cook evenly. When they are as tender as you like, take them out of the microwave. Sprinkle them with cinnamon if you want, but I never do. Eat and enjoy. 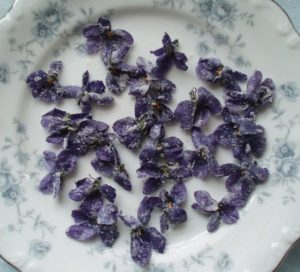 While the violets continue to bloom, my daughter, Rebecca, suggested I describe how to candy them. Here’s what to do.

Pick 50 or so sweet violets, each with a bit of stem. If you can’t candy them right away, keep them covered and chilled for as long as several hours.

When you’re ready to proceed, lay a sheet of waxed paper on a plate. In a small bowl, beat an egg white with about a teaspoon of water. Have at hand small, soft pastry brush and a small bowl of extra-fine sugar, store-bought or ground in a blender or spice grinder from ordinary granulated sugar.

Holding a violet by the stem, brush the back of the petals with a thin coating of egg white. Then brush the front of the flower with egg white, spreading the petals as you do so. Sprinkle a think layer of sugar over every surface, lay the flower face up on the waxed paper, and pinch off the stem. Do the same with the rest of the blossoms, and then set the plate in a warm, dry place until the flowers are completely dry (for me, this means overnight on the pellet stove).

Store the dried blossoms in a small glass jar until you’re ready to use them. They look lovely on a cake or a plate of sweets. 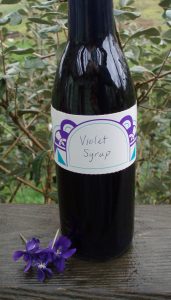 There is little as pleasantly startling as the scent of blooming violets on a cold day in early spring. The little purple flowers have spread so thickly through my front lawn over the years that I now have nearly more violets than grass. But what a lovely ground cover, and what a cheering fragrance when nothing else is blooming but periwinkle and the early, scentless daffodils.

Sweet violets (Viola odorata) are edible; many people candy them or sprinkle them over salad greens. If you don’t mind spending twenty minutes or so picking the blossoms, you can also make them into syrup—syrup as amazing for its blue color as for its aroma. Come summer, you’ll want to try it in soda water, iced tea, or champagne.

The recipe that follows is adapted from my forthcoming Joy of Jams, Jellies, and Other Sweet Preserves.

Combine the flowers and water in a saucepan. Simmer the contents, uncovered, for 15 minutes.

Strain the mixture through a dampened jelly bag. You can squeeze the bag, when it’s cool enough to handle, to extract more liquid. Then measure the volume of the liquid, and combine it in a preserving pan with an equal volume of sugar. Heat the mixture over medium heat, stirring, until the sugar is completely dissolved. Raise the heat to high, and bring the syrup to a full boil.

Remove the pan from the heat. Funnel the syrup into a bottle. Store the bottle, tightly capped, in the refrigerator.