I write about food from my
home in Oregon’s Willamette
Valley, where I continually
experiment with the fruits and
vegetables that I grow. 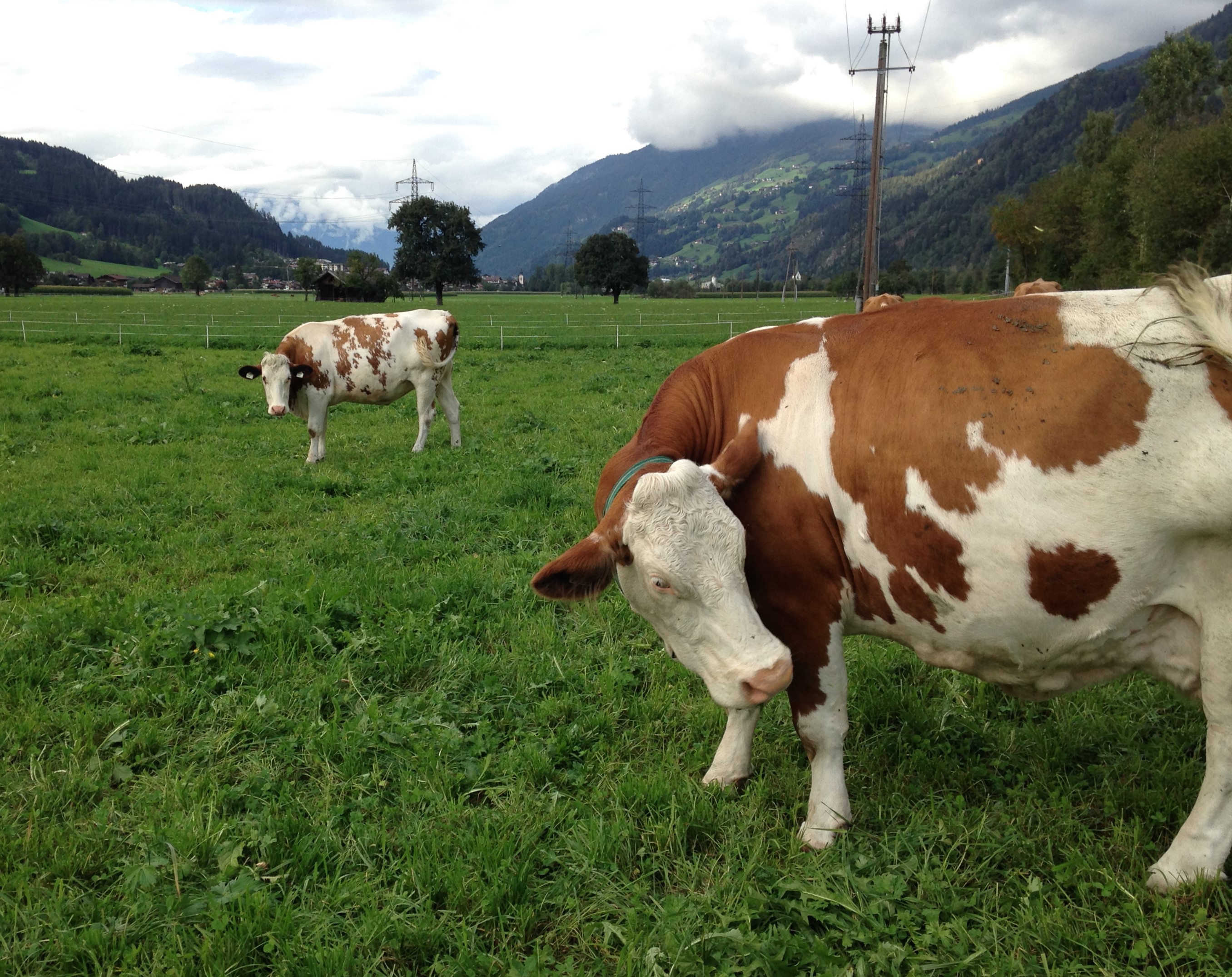 Last month I had the luck to spend two weeks in Austria, a little country of cheerful, modest people and outsized natural and cultural wealth, from the ancient salt mines to the soaring Alps, from Baroque palaces filled with with art to the operas of Mozart, from the gold and jewels of the royal treasury to the lushest cow pastures I’ve ever seen.

As the pastures might suggest, the Austrian food world is rich as well. The butter tastes like butter, the egg yolks are as orange as oranges, restaurants pride themselves on their local and bio ingredients, and farmers all over the country produce their own excellent cured meats and schnaps (brandies from assorted fruits). Here are a few gastronomic highlights of the trip.

Found in the Naschmarkt, Vienna’s double row of permanent produce and restaurant stalls, stretching from one metro stop to the next:

a barrel full of fermented cucumbers;

flavored hummuses (among the merchants are numerous Turks and other immigrants from the Near East);

Kletzen, whole dried pears, upper left; and Weingartenpfirsich, vineyard peaches, lower right. The peaches grow from seed in the vineyards of western Austria, where they ripen at about the same time as the grapes and so provide a handy snack for the harvesters (in case the workers have tired of eating grapes). Although these peaches are small and rather dry, they are preferred over big, juicy peaches for cooking, especially for jam. The dried pears are traditionally used at Christmastime to make Kletzenbrot, a yeast bread containing nuts, spices, and rye flour as well as dried fruit.

Pears are a particularly important food in mountainous areas where grapes don’t grow. The favorite seems to be Williams, or, as we call it in the United States, Bartlett.

In the Zillertal, a valley in the Tyrol, we saw many standard pear trees, like this one. 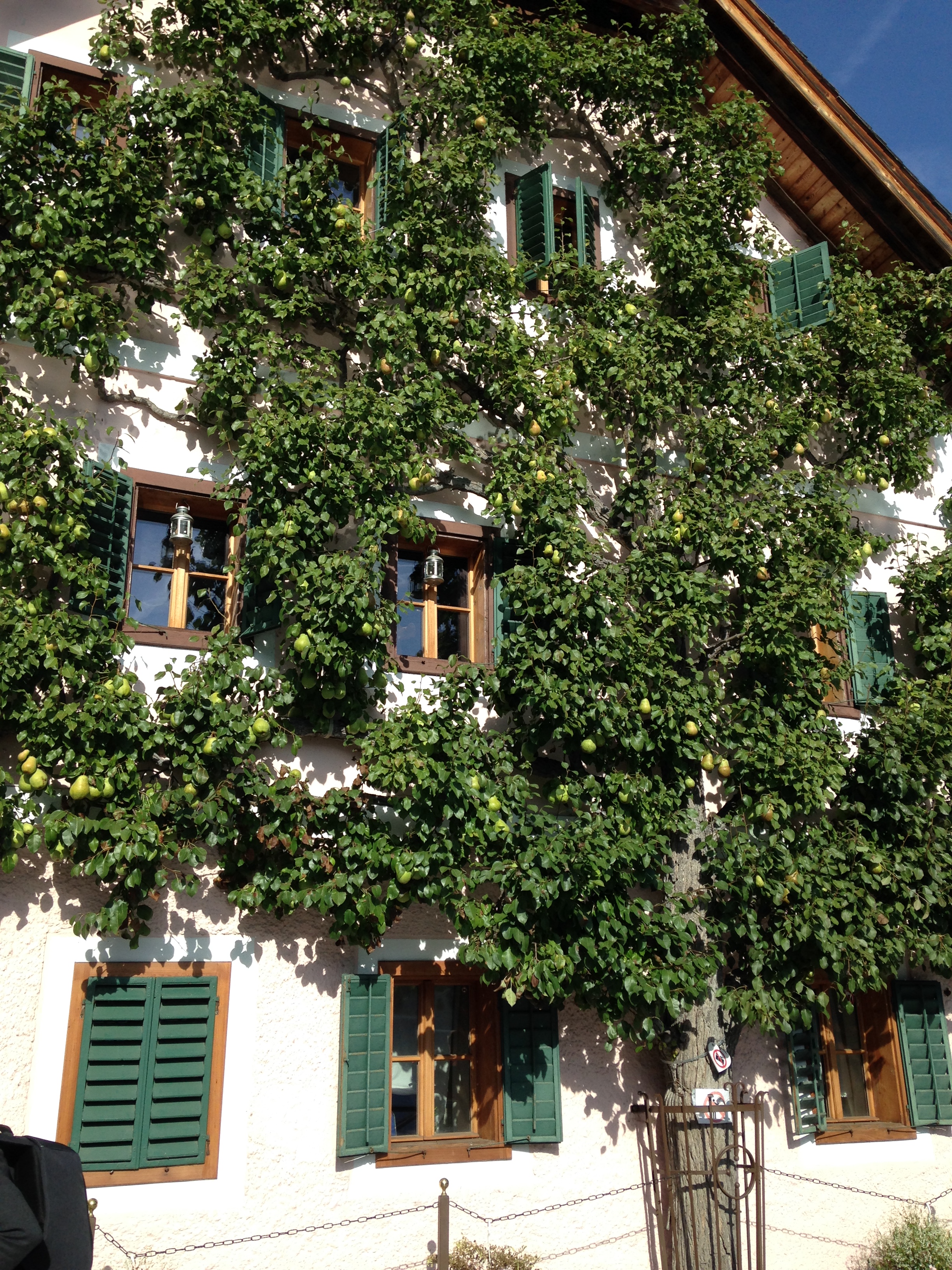 In the Salzkammergut, near Salzburg, we saw several pear trees espaliered against the walls of buildings.

Austrians love all kinds of fruits. At the Nashmarkt in Vienna, these women were selling an assortment of fruit juices.

High on a mountain over the Zillertal, a man stopped his car, pulled out a ladder, and propped it against a mountain-ash (or rowan) tree heavy with fruit. Can you see him in the tree? He is probably gathering the berries—Vogelbeeren—for schnaps. The birds must share!

We were fortunate to be in Austria when the Preiselbeeren—lingonberries—were ripe. A mound of lingonberry sauce, served alongside meat-and-potato or meat-and-noodle dishes, tastes like cranberry sauce but a bit less sour and bitter. Lingonberries are smaller than cranberries, though, so they look more like red currants without the hairy bits. 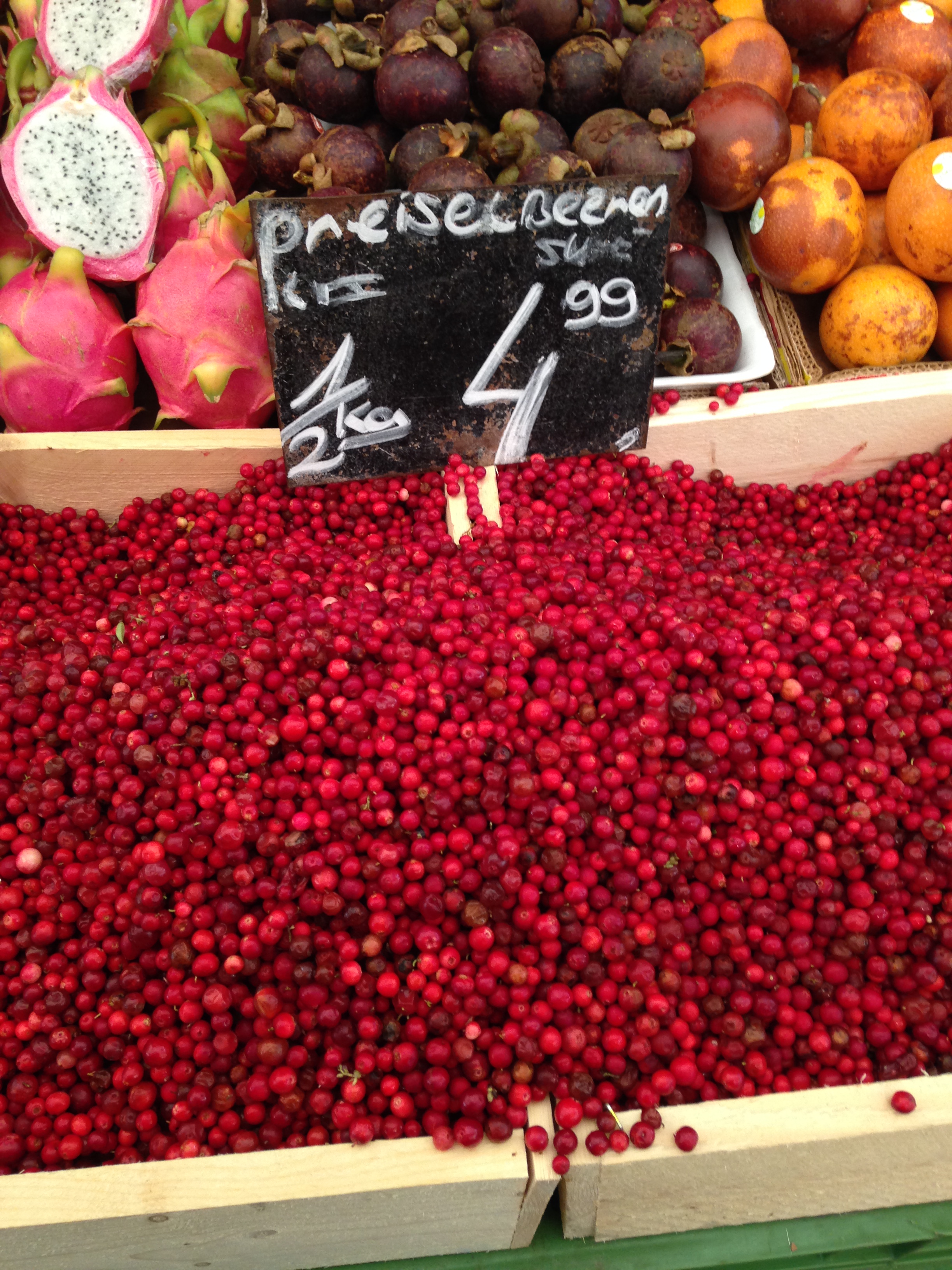 Here are lingonberries in a market.

We found lingonberry plants covering the floor of spruce forests above the Zillertal. Often lingonberries and huckleberries—Heidelbeeren–grow together, so it’s difficult to harvest one without harvesting the other. A handful of the two together makes a fine snack for a hungry hiker, and a basketful makes a nice batch of mixed-wild-berry jam, which we tasted in our hotels. 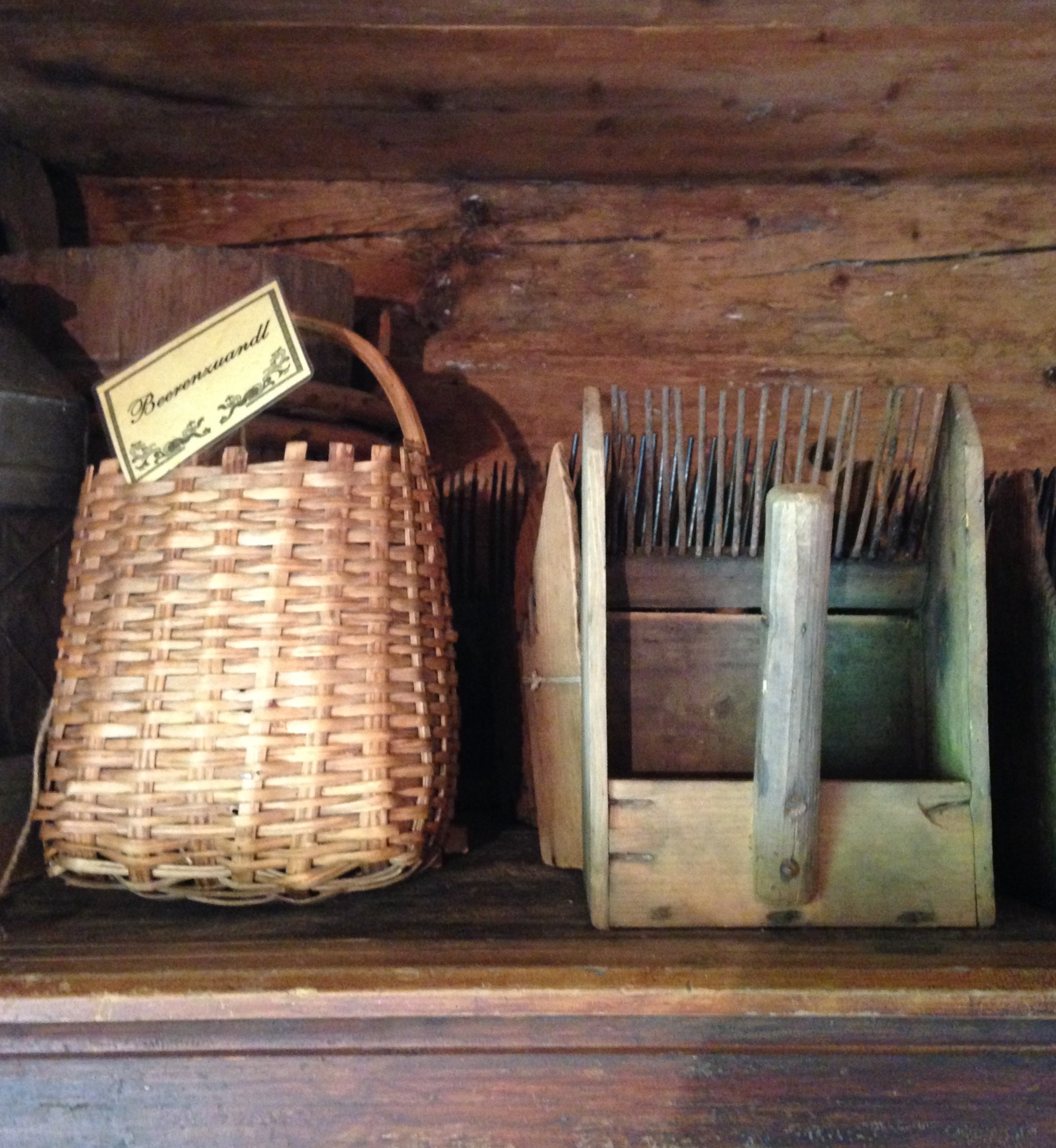 In the Zillertal Regional Museum, we found an old berry basket and berry comb. We’d seen a woman using a comb like this as she foraged in the woods over the Zillertal, while her husband dozed in the car by the side of the road.

While in Vienna I felt I must visit one of the city’s venerable coffeehouses. I chose Café Landtmann. The outdoor tables looked tempting in the sunshine, but the traffic noise drove me into the staid interior.

Unable to work up an appetite for the fancy cakes, I ordered humble apple strudel in a pool of custard.

The strudel made a fine, though expensive, lunch, but when I afterward explored the nearby Kunsthistoriches Museum I wish I’d gone straight there, because smack in the middle of the museum is what must be one of the most beautiful cafés in the world. 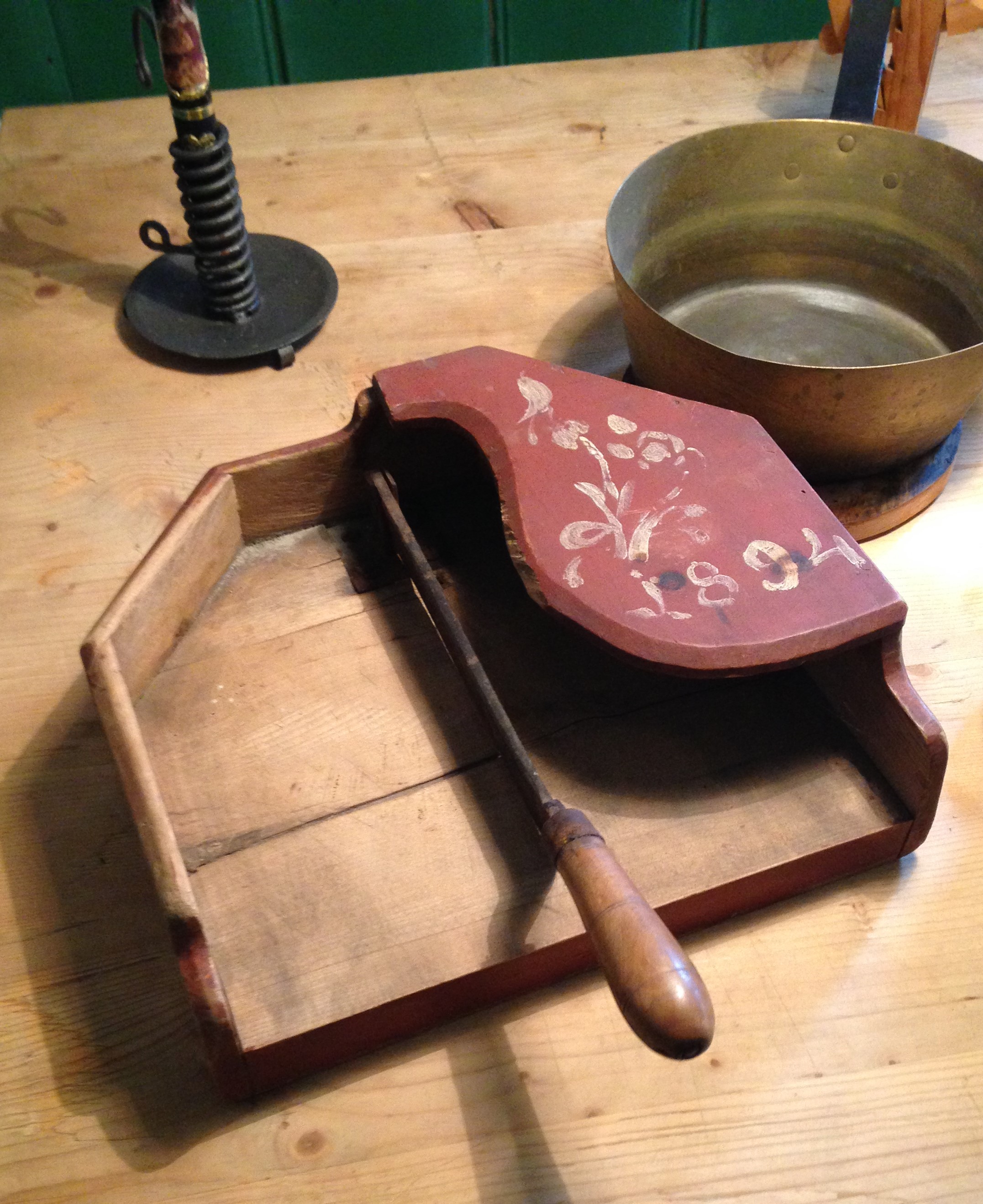 Most Austrian breads are dark and dense, as you might guess from the dimensions of this bread-cutting tray at the Zillertal Regional Museum. I particularly liked the Dinkelbrot, which, I found out only after coming home, is made from spelt.

But Austrian bakers make white breads, too, like these in the shape of soccer balls.

My favorite snack in Austria was Mohnzelten, which are like fig Newtons but big and round and filled with poppyseeds instead of figs. This one, bought in Dürnstein and baked nearby, was made with a potato dough. 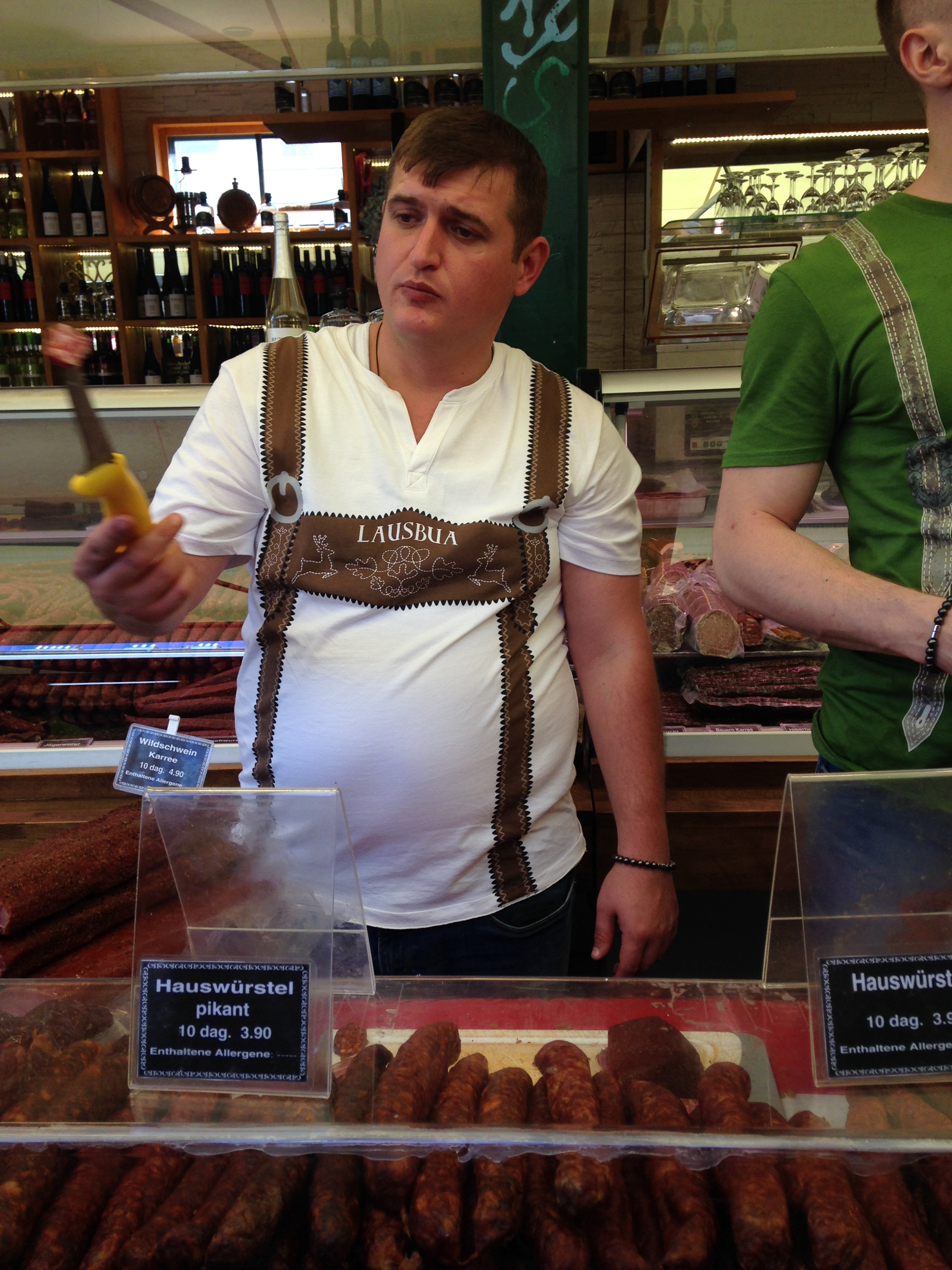 The cured meats of Austria are amazingly diverse and good. This man, in the Naschmarkt, gave us so many samples that we couldn’t eat lunch afterward (note that his Lederhosen straps don’t hold up his Hosen but are printed on his T-shirt). 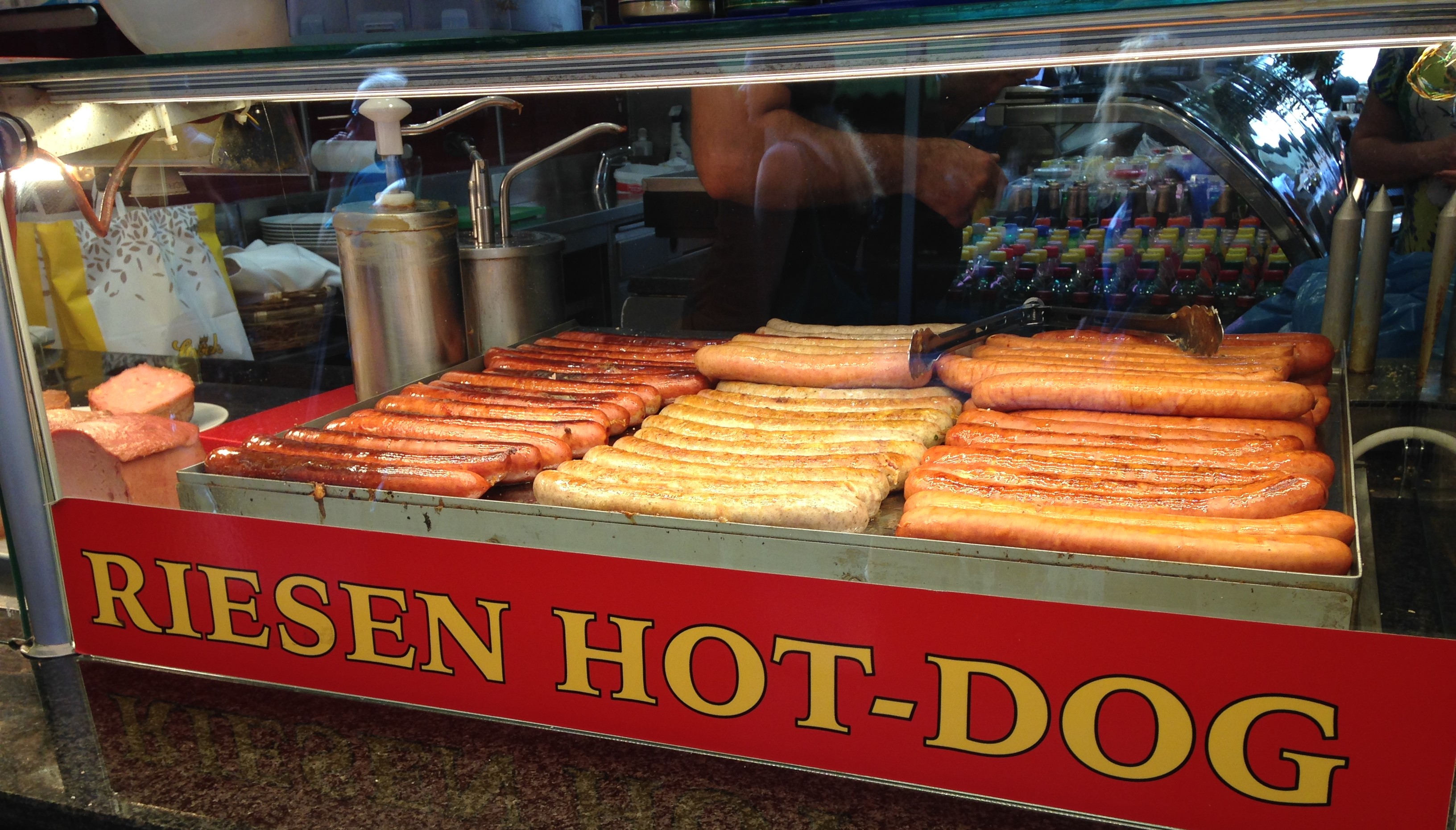 Scattered throughout Vienna are Würstelstände, sausage stands. Long, thin sausages served in a bun are called by their English name, hot dog. The vendor cuts off one end of the bun, jams the bun cut-end down on a spike, inserts the sausage in the hollow thus formed, and squirts in some mustard. We enjoyed the Käsekrainer, a cheese-studded smoked pork sausage. Oh, to find such a hot dog at home!

We found this sausage vending machine along the street in the town of Aschau, in the Zillertal. 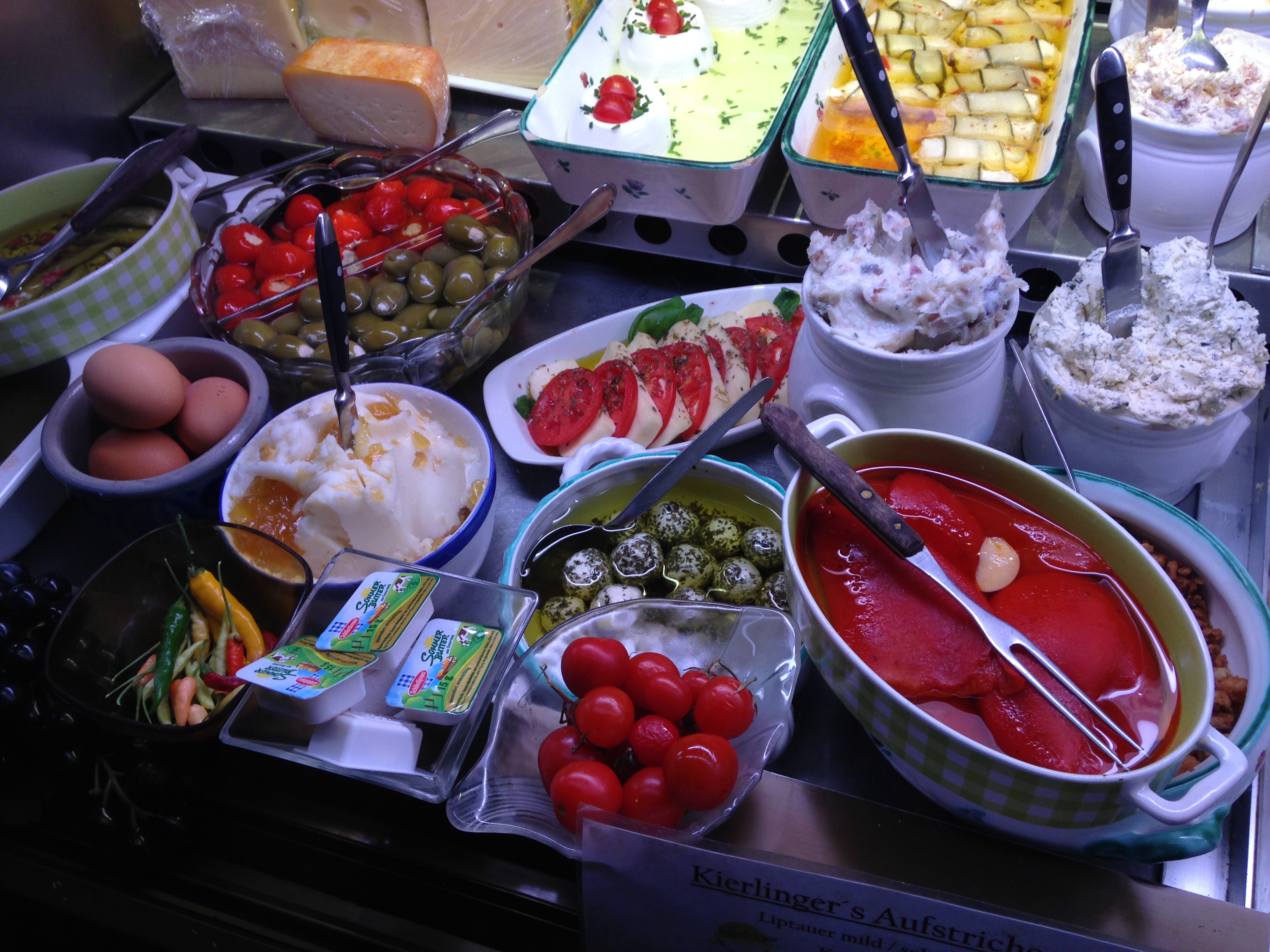 Meats, cheeses, breads, fruits, vegetables, and often fish are included in the lavish breakfast spreads at Austrian hotels—and when you reserve a room in Austria, you’re usually reserving a seat at a breakfast table as well. These two photos show just part of the spread at the Hotel Unter den Linden, in Krems.

This breakfast room, at the Hotel Hubertushof in Bad Ischl, is typical in its comfort and beautiful woodwork. 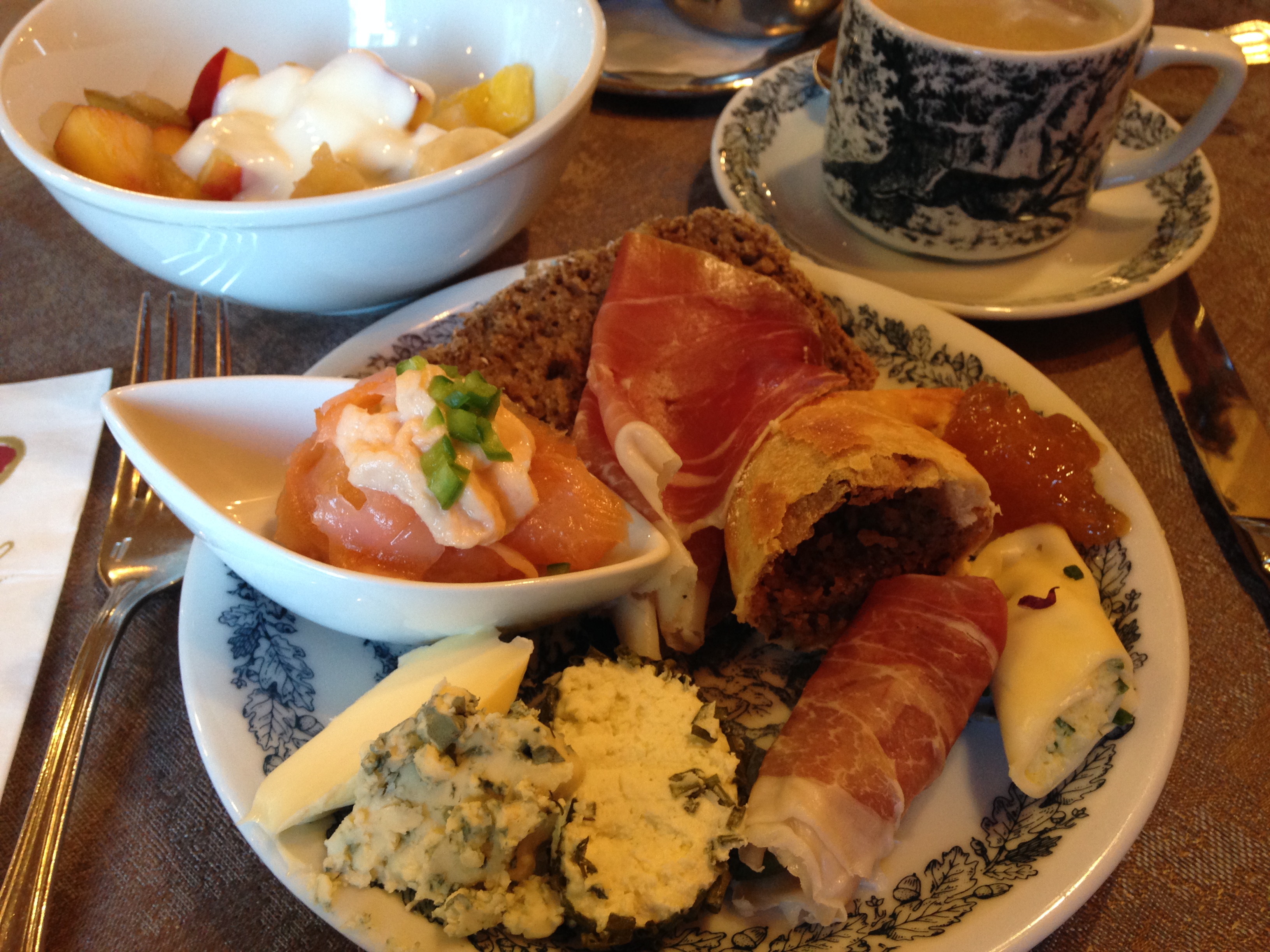 This was one of my breakfasts at the Hubertushof.

Austrian hotels have amazingly sophisticated coffee machines, like expert baristas in a box. Enzianhof, in the Zillertal, even has a machine for poaching your own eggs.

It’s too bad for us that so little Austrian wine is exported to the United States (though the amount is growing), because Wien ist Wein, as they say. Both the red and white wines made around Vienna are excellent. We were happy to be there during the harvest season, so we could taste Sturm, grape juice that has fermented no more than a few days or weeks. 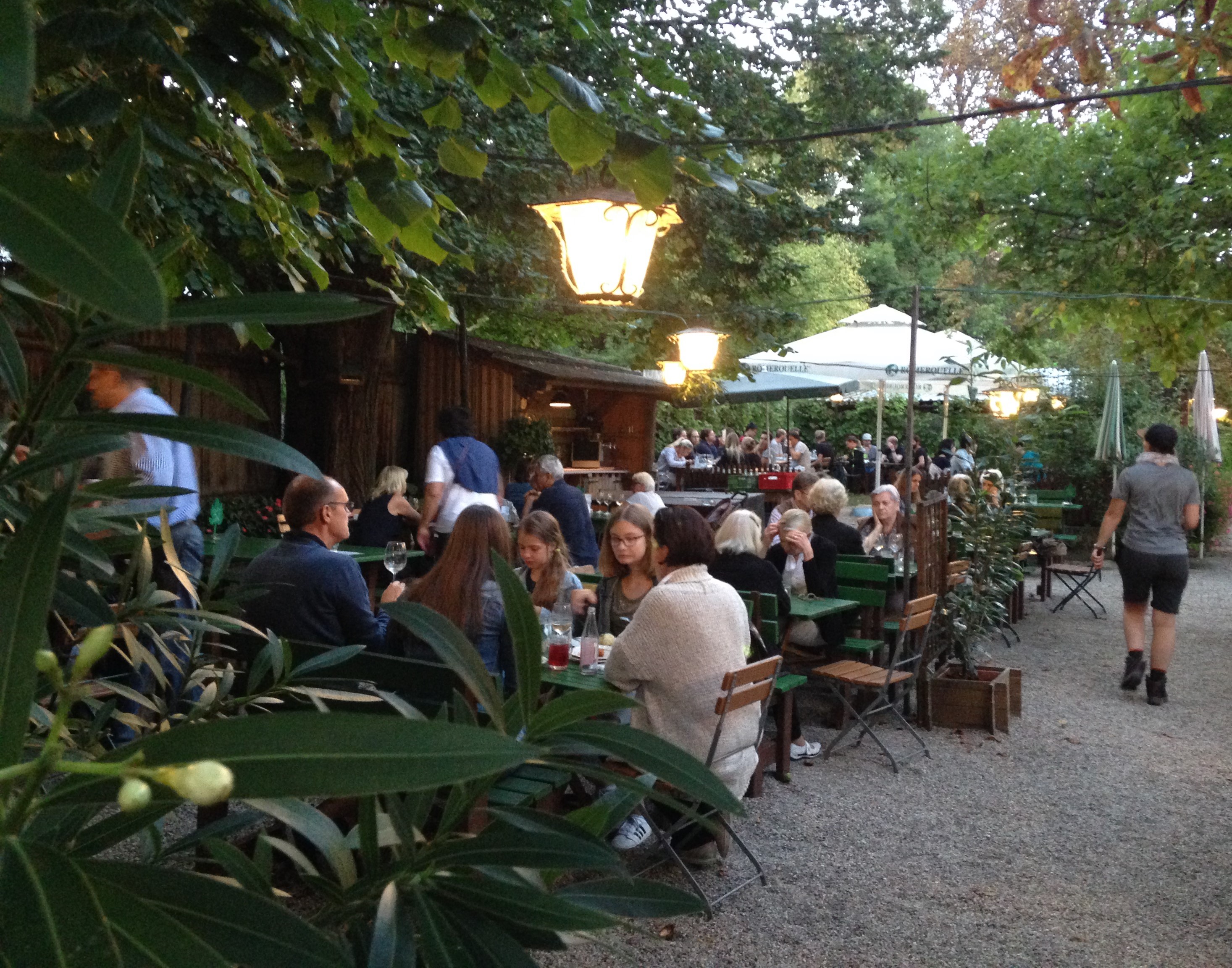 The best place to taste Sturm is at a Heuriger, a wine garden on the outskirts of the city. The wine growers are allowed to sell their own wines along with an assortment of meats, salads, and so on, which you usually order by weight at a counter. This is Heuriger Kierlinger, in Nussdorf. 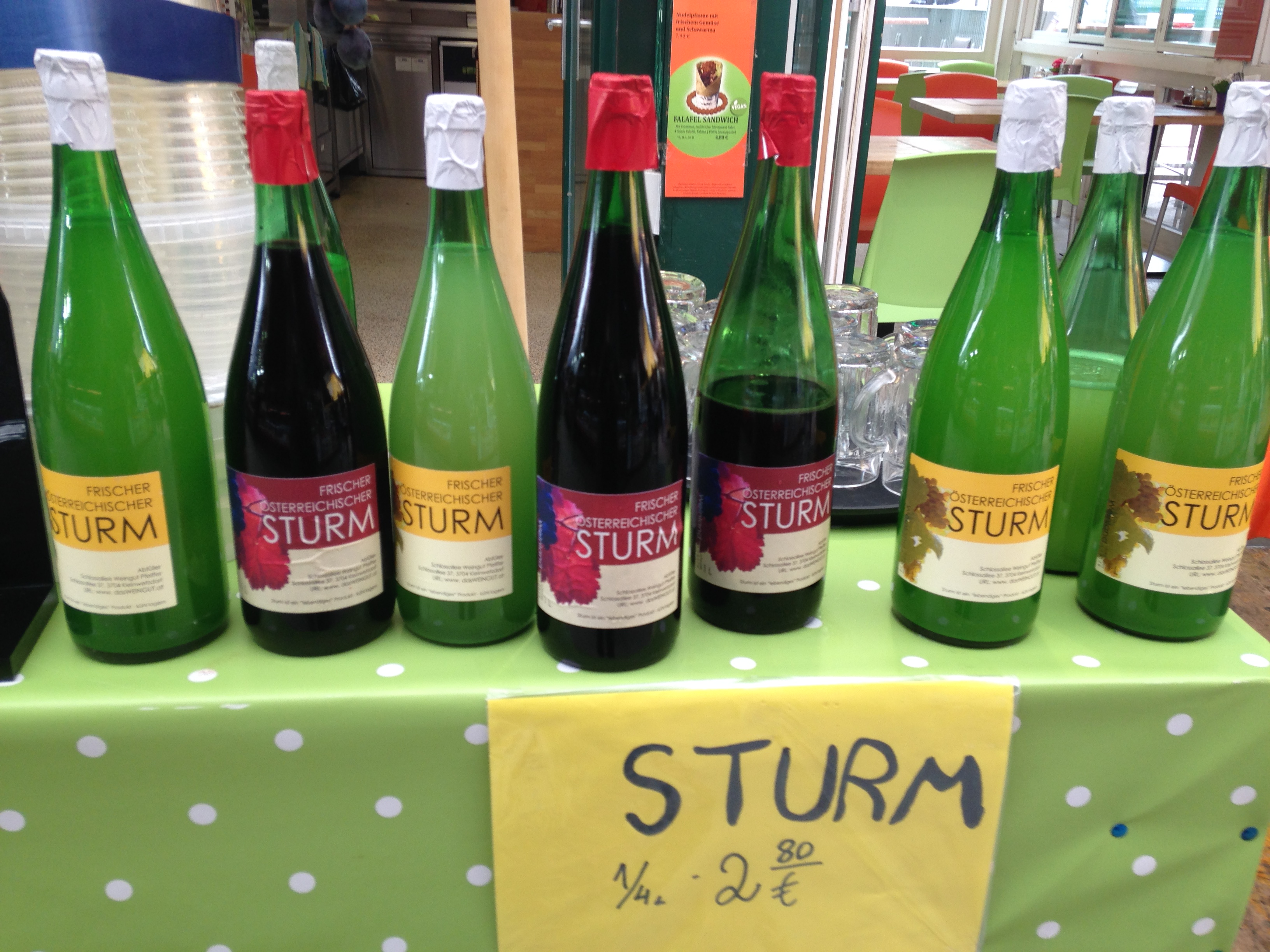 And here is Sturm for sale in the Naschmarkt. 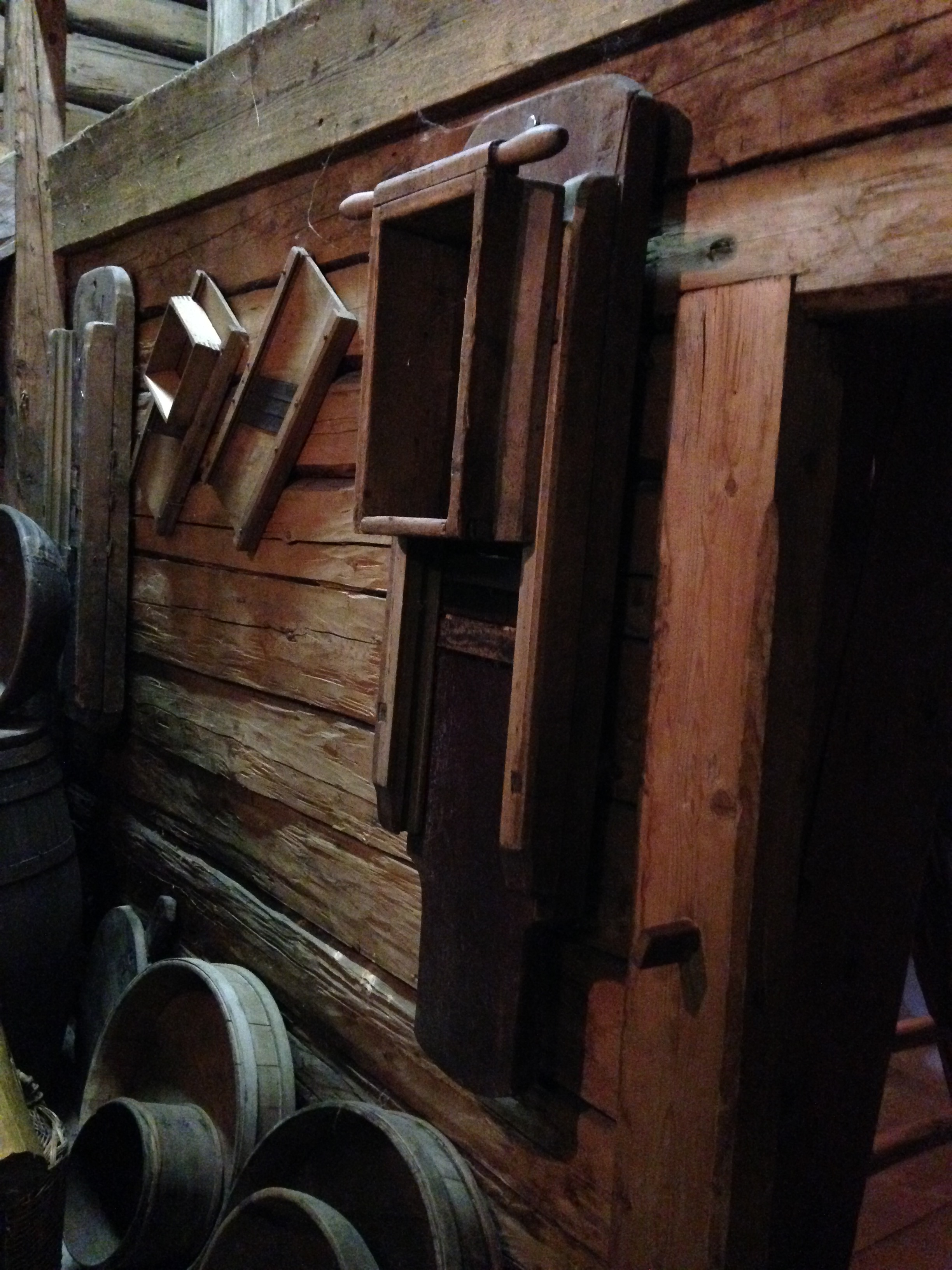 In the Zillertal Regional Museum we found the biggest kraut board I’ve ever seen. It must be four feet long. We saw old kraut boards, big and small, displayed elsewhere, too, but I don’t remember seeing sauerkraut on a menu. Perhaps it was too early in the fall . . . or perhaps kraut has fallen out of style.

12 thoughts on “A Taste of Austria”