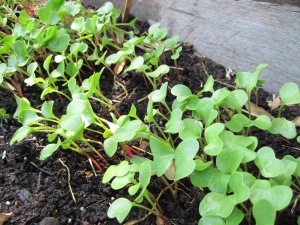 These are red-stemmed kaiware, radish sprouts, growing in one of my raised beds last September. I thank Judy Gregory for sending me the seeds. She got them from Kitazawa Seed Co., of Oakland, which has been selling Asian seeds in California since 1917 (except for a three-year break during World War II, when the Kitazawa family members were confined in concentration camps).

Kitazawa’s online catalog currently lists eight radish varieties for sprouting, in various colors from all-green to all-purple; two other varieties for their developed leaves (ha daikon); and thirty-seven for their roots, from round to tapered and from small (such as French Breakfast) to monstrous (Sakurajima Mammoth, which can reach 100 pounds). Although kaiware and ha daikon are of the same species, Raphanus sativus, as all of the root radishes, the roots of kaiware and ha daikon do not swell.

Kaiware are so delicate that they are always eaten raw. In the Japanese tradition they embellish sashimi and sushi, and at any table they can add a mildly pungent, crisp element to salads, sandwiches, and soups. 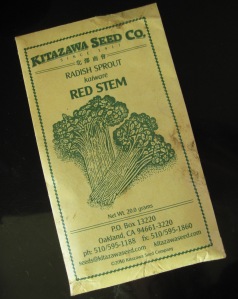 The kaiware seed envelope said the sprouts would be ready in ten days, but I think I started harvesting in five. I cut the stems with scissors; this allowed me not only to avoid bringing soil into the kitchen but also to harvest repeatedly from the same little patch.

After going away for a few weeks, I had big leaves to harvest. Unlike the prickly leaves of cherry radishes, these were tender enough that we could enjoy them raw in salads. We cooked some, too, just as we might cook mustard or beet greens. 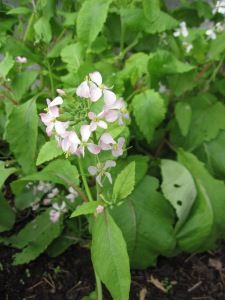 Although I’ve now started a fresh kaiware patch, the original one lasted through the winter, under plastic. We would still be eating from the same patch, in fact, except that I’m now letting it go to seed. Unlike many of the root radishes in the Kitazawa catalog, the kaiware varieties are all non-hybrids, so I plan to keep the seeds in the hope that we can continue eating kaiware indefinitely. As for the money I’ll save, I may well spend it on seeds of some other amazing vegetable variety from Kitazawa.

I grow, cook, preserve, and write about food in Oregon's Willamette Valley.
View all posts by Linda Ziedrich →
This entry was posted in Vegetables and tagged daikon, kaiware, radish. Bookmark the permalink.