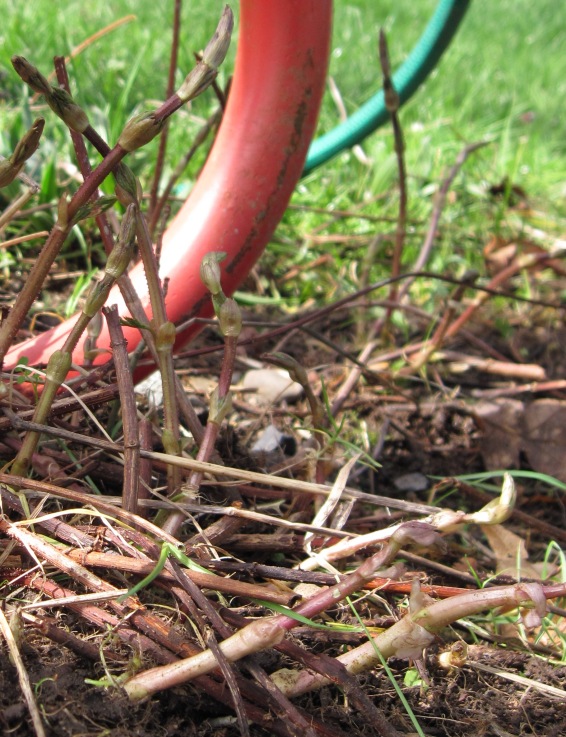 Yesterday, incredibly, the sun shone nearly all day, and the earth dried out enough for me to pull the grass from around our hop plant. I found some hop shoots as tall as a foot and many others barely out of the ground. I wanted to leave only a few sturdy bines to grow, so I cut out the others. The smallest I set aside for dinner. See the short, plump, pale sprouts in the lower right of the picture? Those are hop shoots of the tenderest, tastiest sort, blanched by the cover of grass I’d removed.

I followed the advice of Patience Gray, whose Honey from a Weed is one of my favorite books. In it she describes “SALAD OF HOP SHOOTS. These shoots, picked about 7.5 cm (3”) long, blanched for a few moments in boiling water, then dressed with oil and vinegar, are delicious; poor man’s asparagus. Picking time is April. The shoots can also be used in a frittata.”

If you’ve ever licked a hop flower, you know that hops are among the world’s most bitter foods. But the new shoots have no bitterness at all, even eaten raw. Their flavor is mild and earthy. And although the older bines, like the stalks of hop’s cousin Cannabis, are tough enough to make into rope, the new sprouts are tender—again, even eaten raw.

Robert and I decided against adding the shoots to a tossed salad, a risotto, or a frittata. We wanted to taste them on their own. He dropped them into a little pot of boiling water for about twenty seconds and then dressed them with a few drops each of red wine vinegar and roasted hazelnut oil. 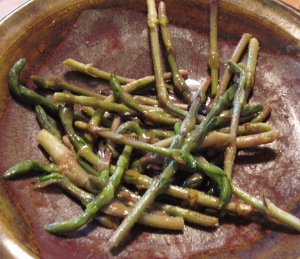 Our little harvest of hop shoots amounted to only an appetizer, but we’ll probably have another picking or two before new sprouts stop emerging. Maybe this modest spring treat will ease our wait for the heaps of rich man’s asparagus to come.

I grow, cook, preserve, and write about food in Oregon's Willamette Valley.
View all posts by Linda Ziedrich →
This entry was posted in Books and blogs, Herbs, Vegetables and tagged Honey from a Weed, hop sprouts, Patience Gray, spring, vegetables. Bookmark the permalink.

1 Response to Hop Shoots for Dinner